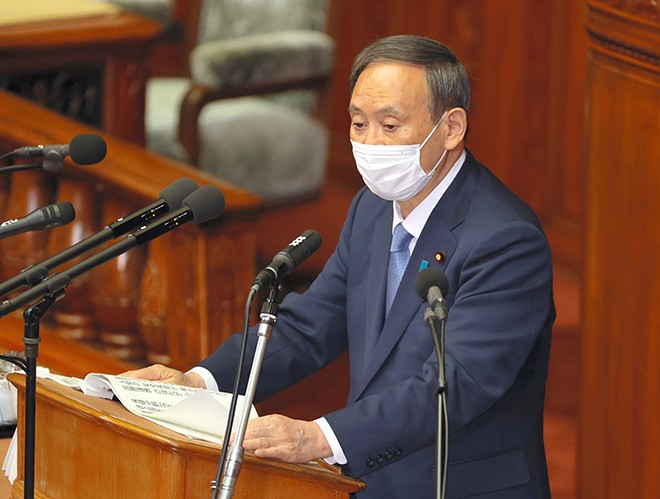 Officials are wrestling with introducing a new target to reduce greenhouse gas emissions by at least 40 percent over fiscal 2013 levels by 2030.

The current target is 26 percent. But with Prime Minister Yoshihide Suga preparing to visit the United States this week and then take part in the U.S.-led climate change summit starting on April 22, government officials feel there is a need to show Japan is taking the issue seriously.

In October 2020, Suga pledged to reach net-zero greenhouse gas emissions by 2050. With 2030 marking a milestone point on the way to that target year, government officials have been working on reviewing the reduction goal.

But according to government sources, there are clear differences in the targets being considered by the economy ministry and the Environment Ministry.

The economy ministry wants to establish a goal based on the accumulated achievements of various planned measures. But the Environment Ministry is seeking a more ambitious goal that would not take a back seat to those being set by other advanced economies.

To come up with new targets, the conditions used to estimate past goals are being changed. The stance currently being considered is to seek a reduction in greenhouse gas emissions while assuming economic growth is being achieved.

The new target will include calls to further spread the use of renewable energy sources, such as solar and wind power.

And with the Biden administration in the United States also taking a more aggressive stance on climate change, some U.S media reports have said Washington is seeking a new goal of 50 percent reduction in comparison to 2005 levels.

If Japan wants to set a goal that keeps it in the same ballpark as those figures, it will have to be at least 40 percent. Further consideration will be given to the exact target figure as well as the expressions used to set the new goal, officials said.