Outcry erupts in and out of Japan over Fukushima water decision 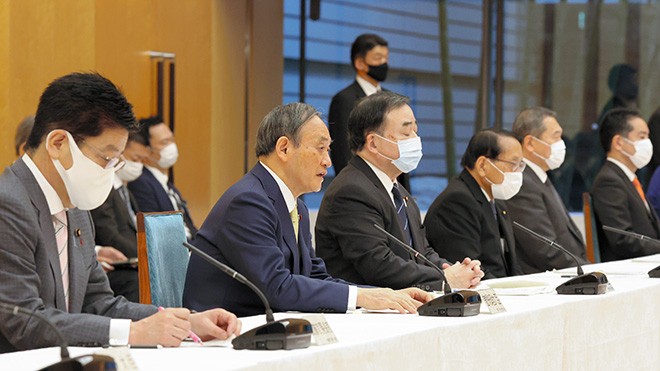 Prime Minister Yoshihide Suga announces the decision to release treated water from the Fukushima No. 1 nuclear plant at a meeting of Cabinet members involved in the issue on April 13. (Koichi Ueda)

Japan’s neighbors and local fishermen blasted the government’s decision April 13 to release treated water from the Fukushima No. 1 nuclear plant into the sea.

Hiroshi Kishi, chairman of the Federation of Japan Fisheries Cooperatives, lashed out at the government in a statement released the same day, calling the decision “extremely regrettable and totally unacceptable.”

“The government reversed its earlier position that it would not go ahead with the water disposal without gaining an understanding from concerned parties,” the statement read. “The decision tramples on the feelings of fishermen not only in Fukushima Prefecture but also in the rest of Japan.”

Kishi demanded the government provide a detailed explanation on how it reached the decision on the water release, how it would respond to damage caused by unfounded rumors about the risks of local products, and how it would secure the safety of the treated contaminated water discharged into the sea.

He also stressed that measures should be compiled to allow local people to engage in fishing for generations.

Prime Minister Yoshihide Suga’s announcement of the water release decision came after he had a meeting with Kishi and other local fisheries representatives on April 7.

Under the plan, more than 1 million tons of contaminated water that has accumulated at the stricken nuclear plant will be released. Tokyo Electric Power Co., the plant’s operator, has run out of space at the site for extra storage tanks to hold the water.

The South Korean government on April 13 called an emergency meeting of top bureaucrats related to the matter.

At the beginning of the meeting, Koo Yun-cheol, who heads the Office for Government Policy Coordination, condemned Japan’s move.

“We express our strong regrets over Japan’s decision, which raises concerns about the safety of not only Japanese but also people in neighboring countries, and adds to the threat to the health of our people from the coronavirus pandemic,” Koo said.

He also said international environmental groups, Japanese fishermen and local residents affected by the Fukushima nuclear disaster are strongly opposed to the release of the water.

Koo added that the South Korean government will form a task force to respond to the issue and share its findings with the public.

“The Japanese side made the decision one-sidedly without fully consulting nearby countries and the international community, disregarding questions and oppositions expressed in and outside Japan,” the statement read. “This kind of approach is extremely irresponsible.”

The statement also said China has the right to take action to counter Japan’s move.

The water-release decision was the top trending topic on the Chinese Weibo social media site on the morning of April 13. Most of the related posts were critical, including, “We can no longer eat marine products from Japan.”

The release of the contaminated water into the sea had long been seen as the most likely option from the outset. But the government made its position ambiguous in fear of a public backlash.

It repeatedly said it would work to “gain an understanding from concerned parties” and will “not proceed to discharge the water without careful consideration.”

Suga announced the government’s disposal policy at the last minute. The government had reached a point where it had to make a decision on what to do with the still-accumulating contaminated water.

Leaks of highly radioactive water from the tanks and an underground reservoir at the plant in 2013, two years after the triple meltdown, sparked concerns in Japan and overseas.

Shinzo Abe, the prime minister at the time, instructed officials to find a solution for the contaminated water.

Between 2013 and 1016, an industry ministry task force weighed the technologically viable options to dispose of the water.

Of the five options proposed, the task force concluded that discharging the water into the sea would be the best method in terms of cost and time period.

Fishermen objected mainly because rumors that overexaggerate the dangers of the released water could lead to plummeting sales of their catches.

A separate ministry subcommittee studied measures to deal with damage from such unfounded rumors from the release of the water over about three years.

But discharging into the sea remained the most preferred way to dispose of the radioactive water.