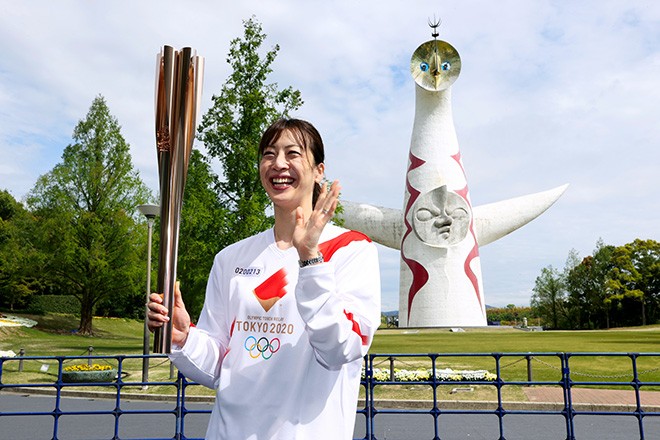 SUITA, Osaka Prefecture--The first Olympic torchbearer took off at 9:15 a.m. on April 13 along a sealed-off alternative course here set up to replace an event on public roads that was scrapped due to the prefecture's recent spike in COVID-19 cases.

As precautions against the novel coronavirus, Olympic torchbearers run through the city's closed Expo ’70 Commemorative Park with only a limited number of spectators allowed, including runners’ families, staff members and media representatives.

Osaka Prefecture became the first local government to decide not to hold the event on public roads in its jurisdiction.

The April 13 relay marks 20 days since the torch relay began on March 25 in Fukushima Prefecture. The opening of the Tokyo Olympics will be 100 days away on April 14. The relay is taking place as people across Japan are being asked to refrain from nonessential travel.

The relay's roughly 3-kilometer route installed in the park was divided into 15 sections, with each torchbearer running some 200 meters.

The organizers allowed up to four family members or friends per runner to see the relay at the park, but limited the number of cars accompanying each torchbearer to a minimum. No Olympic sponsors’ vehicles will travel along the route during the event.

(This article was written by Taichi Kobayashi and Eriko Kai.)