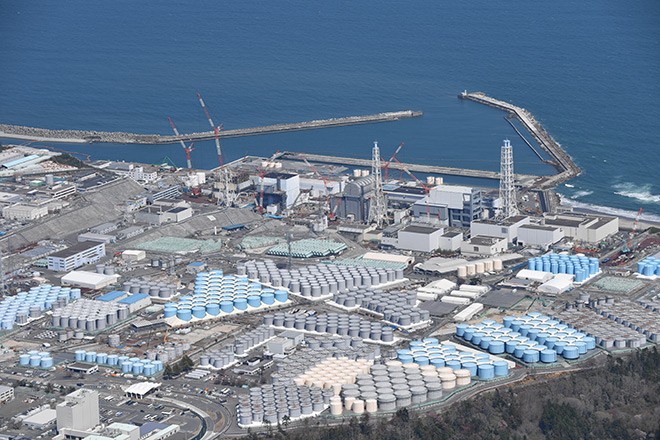 Water storage tanks are lined up at the Fukushima No. 1 nuclear power plant. (Reina Kitamura)

The government on April 13 decided to release treated radioactive water from the crippled Fukushima No. 1 nuclear plant into the sea, despite strong opposition among many concerned citizens.

The government and Tokyo Electric Power Co., the plant’s operator, are duty-bound to win the public’s understanding through thorough dialogue before going ahead.

Ever since the disaster started in March 2011, TEPCO has been injecting water to cool melted nuclear fuel, and groundwater has also mixed in.

The volume of radiation-contaminated water has continued to grow.

The number of tanks holding the water after being treated by the ALPS multi-nuclide removal equipment now tops 1,000. TEPCO says the tanks will reach capacity in autumn 2022.

Facilities for the temporary storage of nuclear fuel will also likely be necessary on the plant’s premises.

A subcommittee of the Ministry of Economy, Trade and Industry in February 2020 indicated that it favored discharging the treated water into the sea over other options.

According to METI, water containing tritium, which cannot be removed by ALPS, is discharged from nuclear plants in Japan and abroad, and no impact on the environment has been confirmed.

The government and TEPCO said they will provide an explanation to the public to prevent the spread of negative publicity and will also expand research on radioactive substances in fishing grounds and other sites.

Should any business incur damage, TEPCO guarantees compensation irrespective of location and industry, and for as long as necessary.

After all, the water to be discharged came in contact with melted nuclear fuel at the crippled plant, and the duration of the water-release process is unclear.

Unexpected mishaps could occur in this unprecedented project.

The public’s distrust of TEPCO runs deep, too.

It came to light in 2018 that the utility had neglected to inform the public that certain radioactive substances remained in ALPS-treated water despite its assurance that they could be removed.

More recently, questions arose about TEPCO’s corporate culture and safety awareness after flaws were found in its counterterrorism setup at another nuclear plant and broken seismometers were left unattended at the Fukushima No. 1 plant.

Regarding compensation payments for the 2011 nuclear accident, the utility has rejected out-of-court settlements with a number of plaintiffs.

Fishermen in Fukushima Prefecture are irate, having just entered a “transition period” this month for full-scale operations. The National Federation of Fisheries Cooperative Associations remains opposed to the water discharge.

In 2015, TEPCO told the Fukushima Prefectural Federation of Fisheries Cooperative Associations in writing that it would not “take any disposal measure without gaining an understanding from stakeholders.” What’s going to happen to this promise?

The government and TEPCO must continue dialogue with those concerned until their understanding has been earned. If the discharge is to be made, an objective and trustworthy system must be set up to monitor radioactive substances.

The most important thing is that the government and TEPCO must readily release information in the event of any incident, even if such disclosure is not required.

If they fail to do so, the public’s distrust will only deepen, and negative publicity will escalate.

An estimated two years are needed to design and build facilities for the water-discharge project, as well as to pass screening by the Nuclear Regulation Authority.

Although the water tanks may fill up in autumn 2022, is there any way to expand storage capacity, such as building more tanks?

No rigid deadline should be set for a decision of this gravity. The government and TEPCO must remind themselves anew that the understanding of local residents is indispensable.