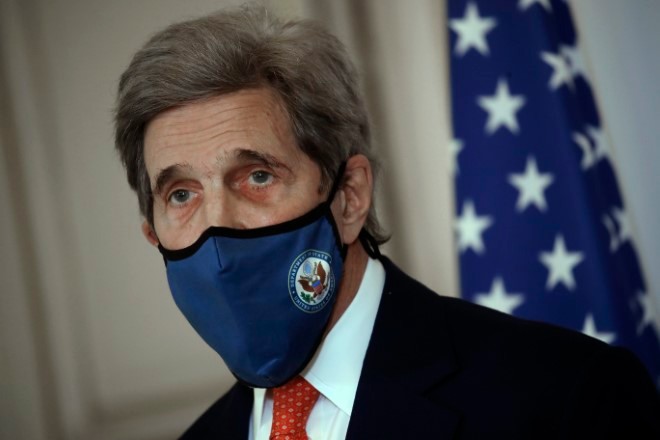 WASHINGTON--U.S. climate envoy John Kerry will travel to China this week to discuss international efforts to tackle global warming, seeking to press his counterparts to make ambitious emissions reduction targets despite tension in the U.S.-China relationship.

The U.S. State Department said Kerry would travel to Shanghai and Seoul, South Korea, for talks on April 14-17, ahead of President Joe Biden’s virtual summit with world leaders on climate change next week.

A source familiar with the plans said Kerry was due to arrive in Shanghai late on Wednesday and hold meetings on Thursday and Friday.

Kerry’s trip comes after an earlier summit in Alaska between U.S. and Chinese officials led to fiery interactions that illustrated the depth of tension between the world’s two largest economies at the beginning of Biden’s tenure in office.

“He’ll be focused on discussing climate and how we can work with leaders around the region to get control of... the climate crisis,” White House spokeswoman Jen Psaki said on Monday about Kerry.

The former secretary of state, who Biden selected to represent the United States in international climate talks, will seek to find common ground on climate change with China’s Xie Zhenhua. Kerry referred to his Chinese counterpart as a “leader” and “capable advocate” in an interview with Reuters earlier this year.

Kerry has been urging countries around the world to set ambitious targets for cutting their greenhouse gas emissions. The United States is set to announce its own new target for emissions cuts by 2030 in the coming week.

Biden’s Earth Day summit, scheduled for April 22-23, will be a chance for the White House to reassert U.S. leadership on climate change. Biden, a Democrat, brought the United States back into the Paris climate accord after his predecessor, Republican President Donald Trump, withdrew in 2017.