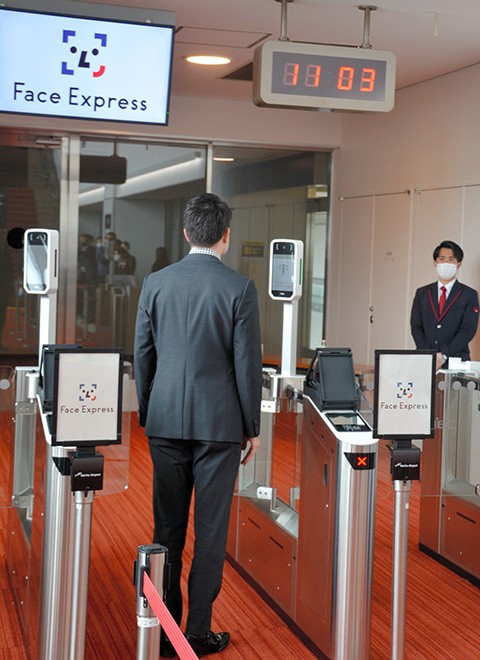 Narita and Haneda international airports will both introduce facial recognition check-in systems in July, according to the operators of the two major travel hubs.

Staff at Narita Airport conducted a demonstration on April 13 to show how it works.

International passengers will be asked at an automated check-in kiosk at the airport if they want to use the facial recognition system.

When a passenger selects that option, the system takes a headshot of the person. It then cross-checks the new headshot with the passenger’s IC chip-embedded passport, which contains data of their passport photo.

Once the system confirms their identity, passengers can then turn their face toward a camera to use a self-service baggage drop off without needing to show their passport or boarding ticket.

Passengers can enter the security checkpoint and pass through a boarding gate in the same manner.

Passengers are asked to remove their masks during the procedure.

However, departure control does not operate in conjunction with the facial recognition system, officials noted.

The system is expected to be made partially available to the public in July at both airports and will gradually become more in use.

At Narita Airport, the new system will be implemented at an All Nippon Airways check-in counter and a Japan Airlines counter as well.

At Haneda Airport, nine check-in counters for airline companies, mainly ANA and JAL, will be equipped with the new system.