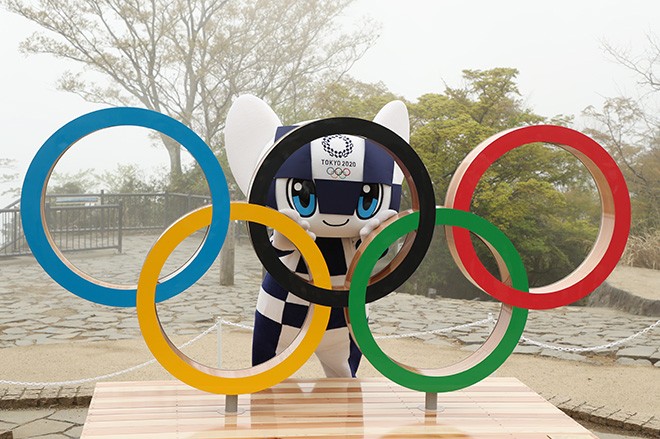 Miraitowa, an official mascot of the Tokyo Olympics, poses for a photo with the Olympic rings monument unveiled at the summit of Mount Takao in Hachioji, western Tokyo, on April 14. (Pool)

Optimism ran high on a cloudy and gloomy day as an Olympic monument was installed on top of Mount Takao in Hachioji, western Tokyo, on April 14 to mark the 100-day countdown to the Tokyo Olympics.

The Olympic rings, a copper monument 3 meters in width and 1.8 meters in length, was introduced at a ceremony in the morning with a conch shell trumpet blaring in the background.

Junichi Miyashita, who won a bronze medal in swimming at the 2008 Beijing Olympics, said the postponement of the Games has generated anxiety among many people, including the athletes.

“One hundred days is such a short period of time, but I hope the public demonstrates an understanding of (the Games), and we will have an Olympics where (athletes) can perform at their best,” he said at the Mount Takao ceremony.

Connected by satellite, the ceremony was simultaneously held at the Tokyo metropolitan government’s office in Shinjuku Ward, where the statues of the Games’ official mascots, Miraitowa and Someity, were unveiled.

Tokyo Governor Yuriko Koike said at the Shinjuku ceremony, “I hope we can contain the novel coronavirus now” in order to safely stage the Olympics.

“I am looking forward to seeing an exciting Games,” she added.

Yasuhiro Yamashita, president of the Japanese Olympic Committee, said, “I feel confident that in 100 days athletes from all over the world will be gathering (in Tokyo) and present a positive message to people.”

The Olympic monument in Mount Takao will remain there until the Games close in August.

Afterward, a Paralympic monument will be installed at the same location.

Olympic organizers have assigned staff to the station at the summit of the 599-meter mountain to ask visitors to avoid crowds in the area to lower the risk of spreading the novel coronavirus.

The two mascot statues, each made of fiber-reinforced plastic and 2.6 meters in width and 1.5 meters in length, are currently displayed in an exhibition corner inside the metropolitan government’s building.

However, the exhibition corner has been closed to the public because of the pandemic.

The organizers said there is no plan to put the mascot statues on public view for a while.

(This article was written by Momoko Ikegami and Midori Iki.)