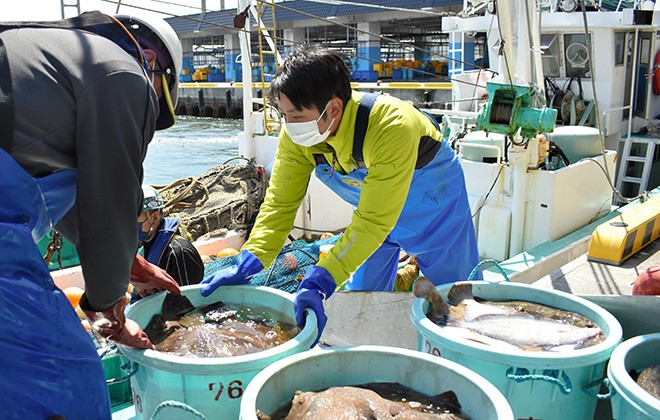 Eitatsu Kikuchi was finally feeling a sense of hope after his industry struggled for a decade to return to some sense of normalcy.

The nuclear disaster in March 2011 had forced fishermen in Fukushima Prefecture to suspend all operations, and their catches still remain around 20 percent of pre-disaster levels.

However, commercial fishing off the coast of the prefecture entered a transition period in April to resume full operations, and Kikuchi, who operates in Soma, about 45 kilometers away from the crippled Fukushima No. 1 nuclear plant, was optimistic about the future.

But the effects of the nuclear disaster dealt another blow.

The government on April 13 announced its decision to release treated but still tainted water from the Fukushima No. 1 nuclear plant into the sea.

“I had hopes that we could finally resume fishing in full swing,” said Kikuchi, 28. “The decision came at a really bad time.”

Government officials began briefing concerned parties in Fukushima Prefecture on its decision to discharge more than 1 million tons of water that has accumulated at the plant.

Their words have done little to ease the anger among fishermen and the concerns of retailers of marine products.

The water will be treated with the ALPS multi-nuclide removal equipment before being released, but the process cannot eliminate tritium. Although tritium is deemed safe enough to be discharged into the sea by nuclear plants in Japan and overseas, the fishermen fear that the words “radioactive substance” will scare away buyers of their seafood.

Kikuchi has always felt close to the sea. His father, Masahiro, 66, who is also a fisherman, would take him to a fishing port when he was a child.

After witnessing the abrupt decline in operations at Matsukawaura Port, a once-bustling major fishing port in the Tohoku region, Kikuchi took over his father’s job of operating a fishing boat for offshore trawling three years ago.

However, he can go out to fish only about 10 days a month.

Despite the hardships, the sea off Fukushima Prefecture has gradually returned to its state before the Great East Japan Earthquake and tsunami. But problems related to the nuclear plant have plagued efforts to return to normal fishing operations.

Leaks of highly radioactive water from the nuclear plant into the sea in 2013, for example, fueled consumers’ concerns about the safety of marine products from the prefecture.

With the transition period, Kikuchi was hoping that he could fish freely like his father, who traveled to waters as far away as Miyagi and Chiba prefectures for his catches. That ray of hope was shattered by the government’s decision on April 13.

“Over the past 10 years, we have faced a setback whenever we thought we made progress by gradually regaining (consumers’) trust,” Kikuchi said. “When will we ever be able to move forward?”

The water-discharge decision has already heightened the fishermen’s deep-rooted distrust of the central government and Tokyo Electric Power Co., the nuclear plant’s operator. Fishing industry leaders said the decision breaks a pledge not to go ahead with a water-release plan without the “understanding of stakeholders.”

Komatsu spent three years rebuilding his home and workspace that were destroyed by the 2011 tsunami.

“I feel more helpless than angry when I think that all the efforts I’ve made to rebuild my life over the past decade have come to nothing,” Komatsu said.

People involved in sales and distribution of marine products said the central government’s decision will not affect their stance on products from Fukushima Prefecture.

“We sell products that are confirmed safe regardless of the discharge of treated water,” said Jun Yamashita, 46, a public relations official of Aeon Retail Co., which operates the Aeon supermarket chain. “That policy won’t change.”

The company has been selling seafood from Fukushima at its supermarkets through cooperation with the prefecture and the Fukushima Prefectural Federation of Fisheries Co-operative Associations since 2018.

Dedicated spaces for Fukushima products have been set up at 13 Aeon outlets in Tokyo as well as Miyagi, Gunma and Saitama prefectures.

Sales staff have learned how Fukushima Prefecture and fishing ports test the safety of the products to answer various questions from customers.

Shoppers in younger generations also began buying more seafood from Fukushima Prefecture through face-to-face sales. Yamashita said the company will continue selling the products by providing thorough explanations to customers concerned about the release of the treated water into the sea.

Intermediate wholesalers of marine products are also struggling amid sluggish demand at bars and restaurants hit hard by the COVID-19 pandemic.

However, he voiced the same concerns of the fishermen in the Tohoku region.

“I’m worried about how customers will react,” Namba said.

He said some consumers cannot help feeling reluctant to buy seafood from Fukushima Prefecture because radioactive substances are invisible.

“All we can do is to tell them that the products are safe as the central government does,” Namba said. “I hope fishermen in Fukushima won’t suffer (from negative publicity) again.”