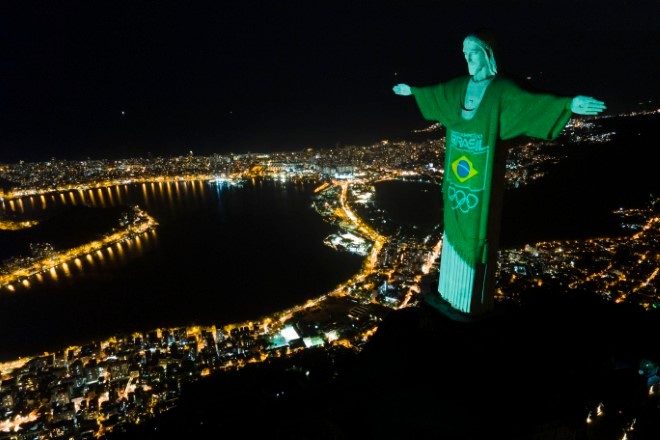 The colors of the Brazilian Olympic team are projected on the statue of Christ the Redeemer by the Brazilian Olympic Committee as a reminder of how sport can inspire in the fight against COVID-19, one hundred days before the Tokyo Olympic Games, in Rio de Janeiro, Brazil, on April 14. (AP Photo)

RIO DE JANEIRO--The world’s most famous statue of Jesus Christ was lit up with the Olympics logo and images of sporting arenas on Wednesday to mark 100 days to the Tokyo Olympic Games opening ceremony.

Hundreds of LED projectors were used to beam images onto the 30-meter Christ the Redeemer in Rio de Janeiro, according to media reports.

The show began and ended with the statue seeming to wear Brazil jerseys in yellow and green, the country’s distinctive sporting colors, derived from its national flag.

Words like “discipline,” “determination,” “respect,” “focus” and “courage” in Portuguese were also projected onto the statue against the backdrop of sporting arenas, from a swimming pool to a running track.

The Tokyo Olympics are scheduled to open on July 23, postponed from last year because of the coronavirus pandemic. But 100 days before the start of the event, organizers still face a deluge of challenges and growing uncertainty.

The last Summer Olympic Games were held in Rio in 2016.

Rio’s iconic statue of Christ with his arms outstretched is undergoing restoration ahead of the 90th anniversary of its completion in October.