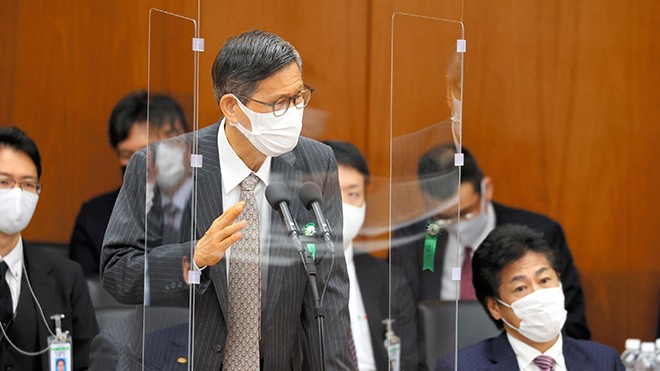 Shigeru Omi, head of the central government panel of experts responding to the coronavirus pandemic, explains the situation in Osaka Prefecture at the Lower House’s Health, Labor and Welfare Committee on April 14. (Koichi Ueda)

Prime Minister Yoshihide Suga came under fire for rejecting the views of leading scientists, including the chief of the government’s expert panel, that a new wave of COVID-19 cases is hitting Japan.

“There is no doubt that Japan is entering the fourth wave of infections,” Shigeru Omi, an infectious disease expert who heads the government panel to respond to the novel coronavirus pandemic, said at the Lower House’s Health, Labor and Welfare Committee on April 14.

He said COVID-19 variants, which are believed to be more contagious and potentially more deadly, are now rapidly sweeping across Tokyo and Aichi Prefecture after trouncing Osaka and Hyogo prefectures.

Omi also said Osaka Prefecture’s situation is severe enough for the central government to consider putting the prefecture back under a state of emergency. The prefecture is currently taking pre-emergency measures to fight the virus, but Omi suggested the alert level there be raised to the maximum.

Toshio Nakagawa, chairman of the Japan Medical Association, shared Omi’s take at a regular news conference on April 14 and called on the central government to take prompt action against the growing health crisis.

“I believe that it is the fourth wave of infections, with the waves getting higher and higher,” he said. “Declaring a state of emergency early may be needed as a pre-emptive move to slow the spread, depending on the extent of the prevalence. If a state of emergency must be issued, it will be more effective to announce it sooner than later.”

“New infections have yet to become large waves nationwide,” he said at an Upper House plenary session. “But we understand that the country is in a situation that the government should handle with a strong sense of caution.”

Yukio Edano, leader of the main opposition Constitutional Democratic Party of Japan, lashed out at the prime minister.

“It is impossible to respond appropriately (to the virus) if the government turns a blind eye to objective facts,” he told a gathering of party members.

The government is expected to discuss which local governments should come under pre-emergency measures against the novel coronavirus.

The pre-emergency measures, which give local authorities more power to enforce anti-virus restrictions, have been applied in six prefectures, including Tokyo, but other areas that have also seen surges in infection numbers have indicated they will request the measures from the central government.

According to health ministry data, the number of new cases from variant strains nationwide rose by 839 over the week through April 6, compared with the preceding week. The week-over-week rise then jumped to 1,525 between April 7 and April 13.

In Osaka Prefecture, variants have caused an accumulated total of 770 infections up to April 13, an increase of 273 from the previous week. The figure was 146 in Kyoto Prefecture, up by 76.

Tokyo saw the steepest rise in new cases from variants, with the overall total reaching 418 through April 13, 319 more than a week earlier.

But these numbers may not reflect the actual situation. Only up to 10 percent of positive test samples have been screened for the variants.