Missing girl’s mother sues over posts accusing her of abduction 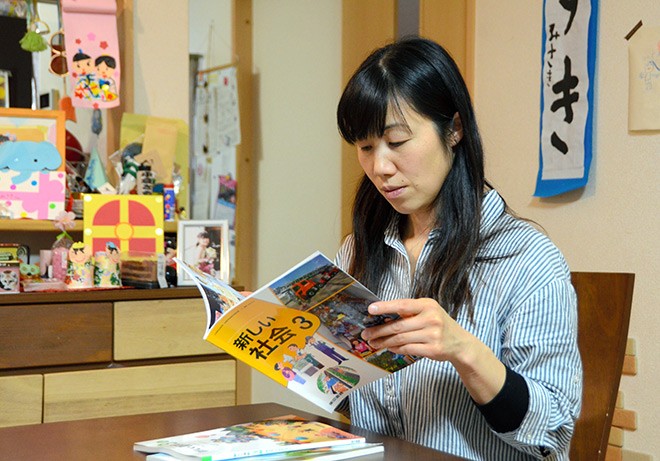 Tomoko Ogura browses through a social studies textbook for her daughter, Misaki, at their home in Narita, Chiba Prefecture, on April 7. Misaki went missing in Yamanashi Prefecture in 2019. (Eri Niiya)

NARITA, Chiba Prefecture--A woman here who is searching for her missing daughter is seeking to unmask the identities of people who accused her in online posts of being behind the disappearance.

For any parent, having a young child who is missing must be one of the most traumatizing experiences imaginable.

But Tomoko Ogura said she also became the target of a barrage of online abuse from anonymous posters after she posted messages seeking information on her daughter's whereabouts on the internet.

The Narita resident now hopes that taking legal action last month will end the attacks on her.

It was also a battle that she waged to protect her two children--Misaki, who went missing two years ago, and her elder sister.

“My eldest daughter is getting old enough to begin using the internet,” Ogura, 38, said. “I want to protect her and Misaki when she returns from getting hurt by those snide remarks online.”

In the lawsuit filed at the Tokyo District Court, she is demanding that the identities of the people who posted be disclosed.

Misaki disappeared in September 2019 after she and her family, joined by more than 20 family friends, visited Doshimura village in Yamanashi Prefecture to camp out.

Ogura said the last time she saw her, Misaki was skipping out to catch up with her friends who had left their tents to play.

After two weeks, police called off the search for the 7-year-old girl.

Ogura continued to hit the streets three to four times a week to hand out fliers looking for leads on Misaki’s disappearance.

She also turned to Instagram and other social media to try and get information from the public on her daughter's whereabouts.

Some people posted comments wishing her success to find Misaki, but Ogura soon encountered a growing number of virulent posts stating that she was responsible for her daughter’s disappearance.

“The mother killed the girl,” said one post. “She must know where the girl is,” said another.

When Ogura cried during an interview with a reporter, some commented that she was only pretending to cry.

On one occasion, a man and woman who posted messages doubting Ogura’s role even came to her neighborhood to talk to her eldest daughter, 11, who was playing near the family’s home. They shot a video of the exchange with the girl and posted it on social media.

Ogura said she became afraid to leave home after the incident.

If she wins the lawsuit, filed on March 29, she intends to ask for damages from her attackers.

The number of people filing grievances over being slandered on the internet is growing steadily.

Internal affairs ministry data shows that about 1,300 grievances were filed at the ministry’s section handling illegal and harmful information in fiscal 2010.

Kazuhito Ozawa, a lawyer representing Ogura, said his client should be provided redress for the online attacks.

“Smearing a person who has been going through a great distress after her daughter’s disappearance is beyond understanding,” he said. “Ogura should be left alone.”

Two men in Shizuoka Prefecture have been arrested in connection with slanderous comments they made about her online.

One of the men, who sent her message that read, “You must have killed the girl. I will kill you,” was found guilty of intimidating her by a court last year. The other is standing trial on libel charges.

Ogura said reading their posts had been “traumatizing” as they were “words that had never been directed at me in my life.”

Despite the pain that abusive online posts have caused her, she has found the risks of attracting trolls online are outweighed by the necessity to use the internet in her desperate search for Misaki.

“I want internet users to remember my daughter when she called out for help,” Ogura said.

Hoping to connect with someone who can help her find Misaki, Ogura keeps posting messages asking for people to share information if they stumble upon a girl resembling her and lists online the phone number of a pet salon that she runs so they can reach her.

“I do not want to abandon any means that might lead to the discovery of my daughter,” she said.

Before Misaki went missing, Ogura shared her bed at home with her young child.

“When Misaki comes back, I want to hold her tight,” she said.