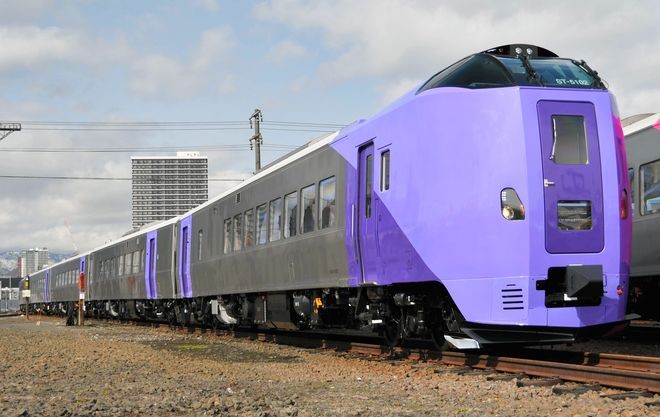 SAPPORO--A sightseeing train painted lavender will begin its purple reign on routes across the northernmost main island of Hokkaido in May, its operator said.

Hokkaido Railway Co. (JR Hokkaido) showed off the multipurpose "Lavender train" to media representatives at its Naebo factory in the city’s Higashi Ward on March 29.

The train will initially operate temporarily as a sightseeing service and for other purposes, the company said.

It follows on the heels of the Hamanasu express train, which went into operation last fall.

The exterior of the Lavender train is painted purple in tribute to the flower that is synonymous with Hokkaido.

Each seat has a retractable tray table and an outlet for electronic equipment.

Car No. 1 is equipped with a multipurpose room that can be used privately or as free space to hold events.

The Lavender will make its debut on May 8 as the special “Hokkaido Love! Furano” service on the Furano Line and other routes. JR Hokkaido will offer a day trip with a special “bento” box lunch.

After mid-May, it will operate as an express train for Abashiri, Kushiro and Hakodate on weekends. It will also operate as the “Furano Lavender Express” on the Nemuro Line and other routes between June 19 and Sept. 20.

The prefectural government will purchase the Lavender for 2 billion yen ($18.37 million) through a semi-public company and lease it to the railway operator for free as a measure to support the financially troubled company. The central government will also subsidize half of the purchasing cost.

JR Hokkaido's intention is to bolster railway tourism with the Lavender to maintain eight money-losing lines which it is finding difficult to maintain without assistance.