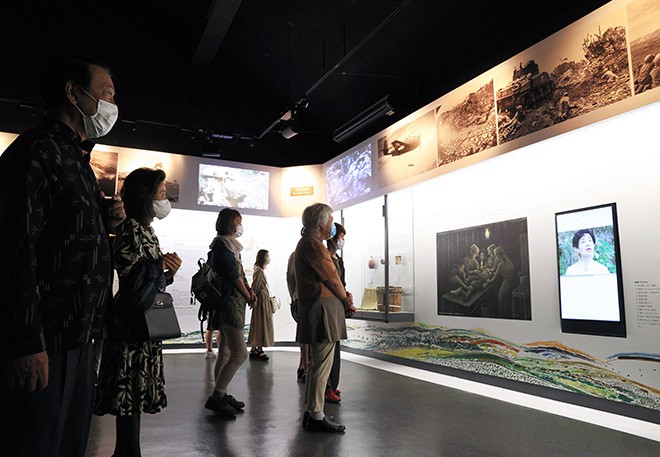 ITOMAN, Okinawa Prefecture--A large painting of girls chatting and walking to the school gate through lush green leaves greets visitors at a renovated museum dedicated to female student nurses mobilized during the 1945 Battle of Okinawa.

The Himeyuri Peace Museum here reopened on April 12 after staff members born after the war renewed exhibits to better convey the experiences of the Himeyuri (star lily) Student Corps to younger generations.

The painting at the entrance was introduced to make visitors feel closer to wartime students by showing that their school life was little different from today.

It replaced a panel explaining the purpose of the museum, which was established in 1989 by survivors of the student corps and former classmates.

The Himeyuri Student Corps, which consisted of 222 female students and 18 teachers, provided nursing care to soldiers at an Imperial Japanese Army hospital set up in a cave in Haebaru, Okinawa Prefecture. By the end of the war, 136 lost their lives in attacks by U.S. forces or through mass suicides.

Elsewhere, the renovated museum features more illustrations, rather than text.

Junior and senior high school students who had seen the previous exhibits complained that they had difficulties understating the experiences of student nurses, saying, “I cannot exactly relate to them” or “I want to understand them but cannot.”

Survivors of the student corps, who have been engaged in oral storytelling to pass down their experiences, said they were satisfied with the changes.

“I’ve spoken about my experiences while trying to imagine what (visitors) don’t know,” Yoshiko Shimabukuro, 93, said after visiting the museum a day before the reopening. “The new exhibits will help visitors understand the reality better.”

The No. 1 exhibition room contrasts ordinary school life with the effects of encroaching militarism, with a photo of smiling students at the window of a school dormitory standing out in particular.

The exhibits show that students attended periodic exams, term inauguration ceremonies and other events on the eve of the Battle of Okinawa, while target practice was being conducted.

The No. 2 exhibition room centers on the days after students were mobilized as nurses, featuring color illustrations of students assisting with a field doctor’s surgery and burying dead soldiers.

A museum curator said, “It is difficult (for young visitors) to understand displays dominated by texts, although some (involved in the renovations) feared that illustrations might render the exhibits too childish.”

A total of 27 illustrations are on display. In many cases, they were checked by former members of the student corps, and corrections were made based on their opinions.

The survivors of the Himeyuri Student Corps have been operating the museum, gathering the personal effects left by former members.

The exhibits were updated for the first time in 2004 to ensure that the wartime experiences will be handed down even after their deaths.

Some staff members were worried about those from the postwar generation re-creating the exhibits produced by former members.

But those concerns were outweighed by fears that the existing exhibits will not resonate with a growing number of young audiences.

When the museum opened, 27 former members served as storytellers, but only four remain. Since 2015, the museum has asked those born after the war to recount the stories on behalf of former members.

Chokei Futenma, 61, the first director of the museum from the postwar generation, describes the latest renovation as a “beacon of hope” for connecting young people with the museum.

“While memories of the war are fading, younger generations will become interested if we offer chances to think about it,” he said.

The number of visitors to the museum has plunged since the novel coronavirus pandemic erupted, falling about 90 percent year on year from April 2020 through this February.

“We are facing the largest crisis since the museum opened,” Futenma said. “We hope to attract more people after the renovation and make our operations sustainable.”