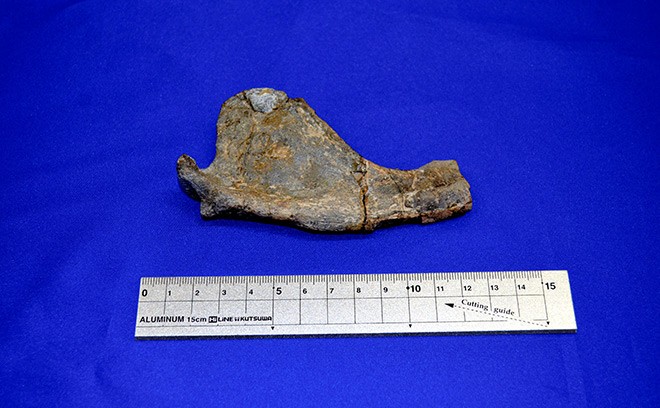 A fossilized jawbone of Neotherium is shown in Onan, Shimane Prefecture. (Takashi Sugiyama)

ONAN, Shimane Prefecture—The first fossil of a primitive walrus species found outside of North America suggests that the prehistoric pinniped inhabited both sides of the northern Pacific Ocean, researchers said.

A fossilized jawbone of Neotherium, an ancestor of modern walruses, was unearthed from geological stratum dating to 16 million years ago in this southwestern Japanese town, according to the Onan board of education.

The fossil find was examined by a team headed by Wataru Tonomori, a researcher at the National Museum of Nature and Science’s zoology department in Tsukuba, Ibaraki Prefecture.

“The survey results are fascinating,” Tonomori said. “They not only indicate that the primitive walrus species had an ability to swim, but they will also help ascertain its evolution processes and habitats.”

Remains of Neotherium had been found only around North America. The discovery in Onan suggests the species was also distributed along the western coast of the North Pacific.

The fossil, 5 centimeters tall, 11 cm long and 1.5 cm thick, appears to be part of the right lower jawbone of a nearly adult Neotherium around 2 meters long. Although no teeth are left, back tooth sockets remain.

The fossil was found by a resident surveying geological formations in the town’s Takami district in 2010.

As it was presumed to be a mammal bone, Onan town authorities asked the National Museum of Nature and Science in summer 2019 to analyze the piece and assess its significance.

Remains of other primitive walrus species have been discovered in Japan, but not any from Neotherium.

Previous fossil finds of shellfish and a shark bone in Takami indicate that the area was seabed in prehistoric times.

“The discovery is surprising and at the same time romantic as it inspires people to imagine prehistoric times,” said Satoru Ohashi, former head of the lifelong education division at the Onan board of education. “We will preserve the piece as an educational material to make children feel proud of their hometown.”

The findings were published in the online edition of the British academic journal Historical Biology.