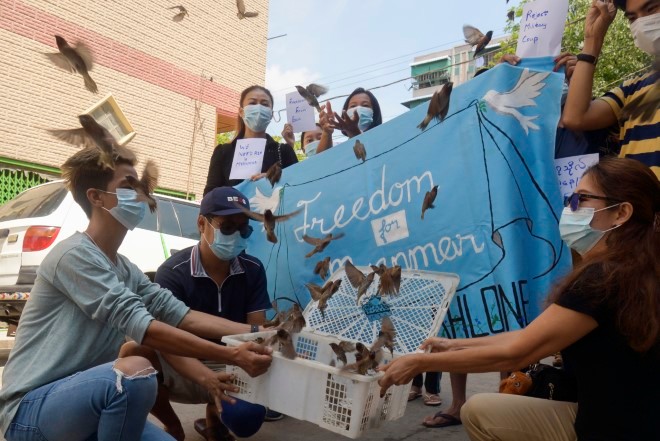 Protesters release birds as they remember those who have been killed during demonstrations against the military coup in Yangon, Myanmar, on April 15. (AP Photo)

Myanmar security forces on Thursday arrested one of the main leaders of the campaign against military rule after ramming him with a car as he led a motorbike protest rally, friends and colleagues said.

Opponents of the Feb. 1 coup that ousted an elected government led by Nobel peace laureate Aung San Suu Kyi have kept up their campaign against the military this traditional New Year week with marches and various other shows of defiance.

“Our brother Wai Moe Naing was arrested. His motorbike was hit by an unmarked police car,” Win Zaw Khiang, a member of a protest organizing group, said on social media.

Wai Moe Naing, a 25-year-old Muslim, has emerged as one of the most high-profile leaders of opposition to the coup.

Earlier, Reuters spoke to him by telephone as he was setting off to lead the rally in the central town of Monywa, about 700 kilometers north of the main city of Yangon.

Video posted on social media showed an oncoming car swerving into a group of motorbikes.

A spokesman for the junta could not be reached for comment.

Monywa has been one of main centers of the pro-democracy campaign with big rallies day after day and repeated crackdowns by the security forces.

Some colleagues said they feared for Wai Moe Naing's safety.

The Swedish embassy said it was following his case and urged that all detainees be allowed proper health care and their human rights be respected.

“This appalling act further demonstrates why the people of Myanmar do not accept the military regime,” the embassy said in a post on Twitter.

State media said a famous actor, Zin Wine, and singer Po Po, both known for their support of the democracy movement, had also been arrested.

The coup has plunged Myanmar into crisis after 10 years of tentative steps toward democracy, with, in addition to the daily protests, strikes by workers in many sectors that have brought the economy to a standstill.

An activist group, the Assistance Association for Political Prisoners, says the security forces have killed 715 protesters since the overthrow of Suu Kyi's government.

Earlier on Thursday, soldiers opened fire in the city of Mandalay to disperse protesting medical workers and one man was killed and several wounded when security forces fired in a nearby neighborhood, media reported.

Some medical workers have been at the forefront of the campaign against the coup, which for many people has dashed hopes of a more open society after tentative steps towards democracy since the military initiated reforms a decade ago.

State television announced that 20 doctors were among 40 people wanted under a law that makes it illegal to encourage mutiny or dereliction of duty in the security forces. Some 200 people are now wanted under the charge.

The military says the protests are dwindling but thousands joined protests marches and motorbike rallies in several towns, according to pictures posted by media outlets.

The United States and other Western countries have imposed limited sanctions focused on the military and called for the release of Suu Kyi and others detained by the new authorities.

Leaders of Southeast Asian neighbors, which have been trying to encourage talks between the rival Myanmar sides, are due to meet in Indonesia on April 24 to discuss the situation, Thai PBS World reported.

Junta leader Senior General Min Aung Hlaing is due to attend, the broadcaster said, on what would be his first known trip abroad and contact with foreign leaders since he seized power.