British variant expected to cause most infections in Japan in May 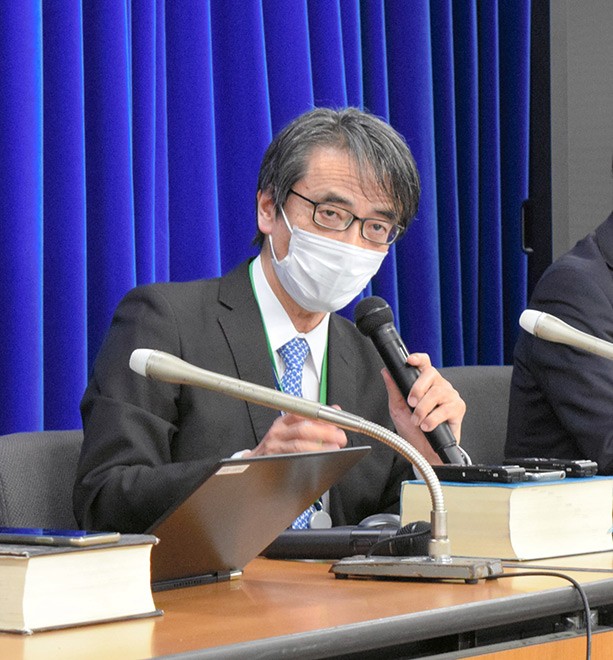 Takaji Wakita, chairman of the health ministry’s expert panel and head of the National Institute of Infectious Diseases, speaks at a news conference on April 7. (Naoyuki Himeno)

The British variant of the novel coronavirus that has fueled a medical crisis in Osaka Prefecture will spread and become the dominant infection source nationwide in May, health experts said.

Using test results up to early April, the National Institute of Infectious Diseases analyzed the ratio of patients who contracted COVID-19 variants and the increase in the number of patients.

Based on the results, the experts estimated that 90 percent of the new COVID-19 patients in the Kansai region and Okinawa Prefecture as of mid-April had been infected with the N501Y variant.

The ratio in the Tokai region was estimated at 80 percent, and 50 percent in the areas around Tokyo.

“If this pace continues, most of the new cases (in Japan) will be N501Y in early May,” Motoi Suzuki, head of the NIID’s Infectious Diseases Surveillance Center, said.

Variants from Brazil and South Africa have infected people in Japan, but the most dominant one here has been the N501Y strain that originated in Britain, according to the analysis.

The variants will likely spread the fastest in Okinawa Prefecture and cause most of the new cases in late April, the experts said.

In the Kansai region, including Osaka Prefecture, the ratio of COVID-19 patients infected with new strains is expected to exceed 90 percent of all new cases on May 1 at the earliest.

The experts also said the ratio will likely top 90 percent in early May in the central Tokai region and the greater Tokyo metropolitan area.

In areas where the number of new COVID-19 cases is small, it will take more time for the COVID-19 strains to spread there.

The trend in the Tohoku region is still under analysis, but the northeastern region will be in the same situation as the other variant-hit areas in the near future, Suzuki said.

The health ministry’s panel of experts on April 14 discussed the possibility that the new variants will sequentially replace the old ones and become dominant around Japan next month.

Takaji Wakita, who chairs the ministry’s panel and heads the NIID, said the spread of highly contagious variants have heightened the latest wave of infections.

“The movement of people after the state of emergency was lifted and during the change in the fiscal year has had a big impact on the (current surge in infections),” he said.

The ministry’s panel also discussed the current situation in Osaka Prefecture at the April 14 meeting.

According to the Osaka prefectural government’s data, the time between developing symptoms and becoming severely ill has shortened by a day.

Between October 2020 and February this year, the median period for such a development was eight days. But from March 1 to April 13, after the new strains spread widely, the median value was seven days.

The percentage of new patients under 60 years old has increased in the prefecture, according to the data.

From October 2020 until February this year, people in that age group accounted for 17.5 percent of all severely ill patients in the prefecture. The ratio jumped to 33.5 percent during the period from March 1 to April 13.

However, the panel said the number of cases for the age group is relatively small and more analyses will be needed to determine if the new strains are causing the upward trend.