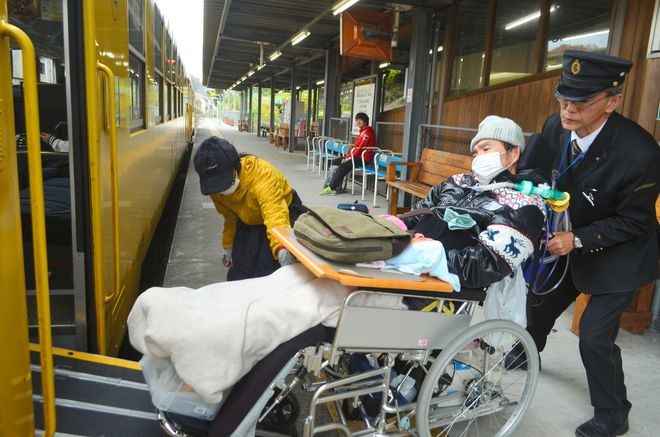 A wheelchair user boards a train with the help of JR-affiliated personnel in December 2019 at JR Oitadaigakumae Station in Oita. (Asahi Shimbun file photo)

When Natsuko Izena wrote about railway staff discouraging her from taking a trip to an unstaffed station, her aim was to foster greater understanding about accessibility issues for wheelchair users.

But her post was soon met with disparaging comments that called her “selfish” for imposing demands on the rail line.

Izena, 38, is a columnist from Kawasaki who uses an electric wheelchair to get around.

She arrived at Odawara Station 30 minutes earlier than her train’s departure time to inform the staff of her destination. She was told to come back in 15 minutes. But when she returned, station staff advised her against going to the destination.

“Kinomiya Station is only equipped with stairs, so it is impossible to guide you there,” a staff member was quoted as saying by Izena. “Is it OK for you to disembark at Atami instead?”

This made Izena feel like the railway was “refusing to allow me to take a ride.”

Kinomiya Station is 1.6 kilometers away from Atami Station, and it would have been difficult for her to take a taxi there because reservations for wheelchair-accessible cabs normally must be booked a month in advance.

Izena said she could not find any descriptions indicating her destination was an unstaffed station when she checked, and she did not realize that directly contacting the railway operator in advance was necessary to figure out where she can travel.

In the end, four station staff members accompanied Izena to Kinomiya Station to carry her wheelchair up and down the stairs.

“We could not quickly secure personnel, so we recommended she use a taxi,” said a representative of the Yokohama branch of East Japan Railway Co. (JR East). “We wished we had more time but did the best we could.”

The law for eliminating discrimination against disabled people, which came into force in 2016, bans operators from imposing restrictions related to place or time on people with disabilities.

Although JR East asks that passengers with disabilities make “prior appointments” when they want to board trains, the company said it is only a request and that it does not actually require advanced notice.

NOT ASKING FOR 'SPECIAL RIGHTS'

When Izena shared her experience on her blog, commenters criticized her for not making an appointment in advance.

One argued that railroad staff only failed to properly address the issue because Izena “made an unreasonable demand.”

The disparaging comments came despite years of progress in spreading the concept of normalization--the idea that people with disabilities should be able to live in the same way as everyone else in society.

Satoshi Sato, 53, secretary-general of the Japan National Assembly of Disabled Peoples’ International, said people unsympathetic to Izena have likely not spent much time around people with disabilities.

“Disabled individuals often study at special-needs schools,” Sato said. “They (the commenters) might not be able to imagine how disabled citizens live, so they treat them coldly.”

Sato asked people to broaden their perspective and understand that “those with disabilities are not demanding special rights, but simply asking for an environment where they can lead a normal life.”

“I hope this case will help deepen people’s understanding of those with disabilities,” Sato said.

UNSTAFFED STATIONS ON THE RISE

The number of unstaffed rail stations across Japan has been growing, numbering 4,564 as of March 2020, according to the transport ministry.

At the same time, other stations only have a limited number of staff who can assist wheelchair users.

The transport ministry said it is currently consulting with the disability community to develop guidelines on what measures railroad operators should take at unstaffed stations to make them more accessible.

(This article was written by Shinjiro Omiya, Takashi Ogawa and Hidemasa Yoshizawa.)