Osaka close to panic; now eyes another state of emergency 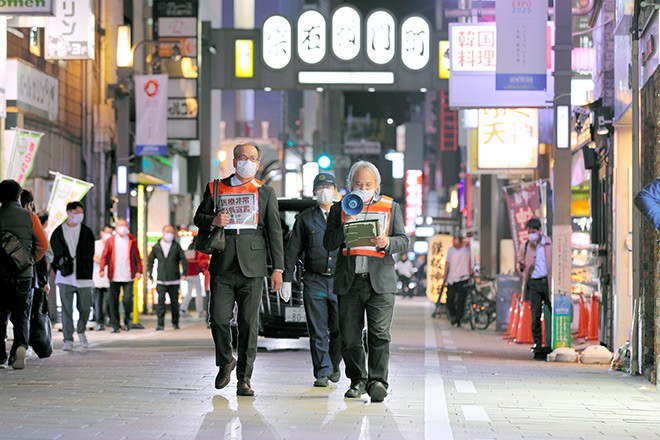 Osaka local government officials and police officers patrol the streets of the Minami entertainment district on April 15 to call on residents to refrain from unnecessary outings. (Yoshiaki Arai)

The governor of Osaka Prefecture said he may be forced to request another state of emergency as new cases of COVID-19 show no sign of dropping despite the introduction of measures just one level below such a declaration.

Hirofumi Yoshimura's warning came as four more prefectures, three of them neighboring Tokyo, along with Aichi in central Japan, were designated April 16 as warranting pre-emergency measures to cope with surging cases of COVID-19.

Osaka Prefecture, the first to implement pre-emergency measures from April 5, has so far found that such steps are proving largely ineffective in curtailing increases in patient numbers.

Rather than restraining new cases, Osaka has recorded more than 1,000 of novel coronavirus infections daily from April 13.

Yoshimura, appearing April 16 on a local TV program, called on residents to refrain from unnecessary outings and work from home.

“It is very important now to reduce movement by and contact between people,” he said. “Infection prevention measures taken by each individual will lead to protecting lives.”

That same day, Osaka Prefecture confirmed 274 COVID-19 patients with serious symptoms, exceeding the number of hospital beds prefectural authorities had set aside for such cases. Some patients are being treated at medical institutions that were initially only supposed to handle individuals with light or medium symptoms.

Osaka City Juso Hospital is one such facility, having set aside 70 beds for those with medium symptoms. Sixty-one of those are now filled and 10 or so patients have developed serious symptoms.

“If the bed situation for those with medium symptoms becomes tight, more patients will be forced to rest at home or in other accommodation,” said a hospital official. “But then if those patients later require hospitalization, it will mean they have developed serious symptoms.”

Overwhelmed by COVID-19 patient cases, some hospitals are being forced to limit the number of emergency patients they can accept with serious injuries and diseases.

Yoshimura pledged to closely monitor COVID-19 figures for the week from April 19 and said that if the pre-emergency steps are still proving insufficient he will ask the central government to again declare a state of emergency for his jurisdiction.

Hiroshi Nishiura, a professor of theoretical epidemiology at Kyoto University, said that even if the pre-emergency measures lead to a 30-percent reduction in the so-called effective reproduction number, which shows how many people a COVID-19 patient has infected, Osaka would still see about 400 patients with serious symptoms by around April 26.

“A state of emergency should be declared immediately and stronger measures implemented to reduce the number of new cases,” Nishiura said. “Waiting for weak effects will lead to not being able to save lives that could have been saved.”

Some participants at an April 16 meeting of the government panel of experts dealing with the pandemic also called for a state of emergency for Osaka.

Shigeru Omi, the panel chairman, appearing at an April 16 session of the Lower House Health, Labor and Welfare Committee, stated that a decision would likely have to be made early in the coming week.

As Osaka Prefecture continued to grapple with the crisis, Kanagawa, Saitama, Chiba and Aichi prefectures were designated as requiring pre-emergency measures from April 20.

Kanagawa Governor Yuji Kuroiwa, who just a week ago had been cautious about the need for such measures, said April 15 that with the increase in new COVID-19 cases after the lifting of the state of emergency, pre-emergency measures may have to be repeatedly required until numbers drop significantly and vaccinations spread through a large part of the local population.

(This article was written by Yuka Honda, Yushin Adachi and Yuki Edamatsu.)