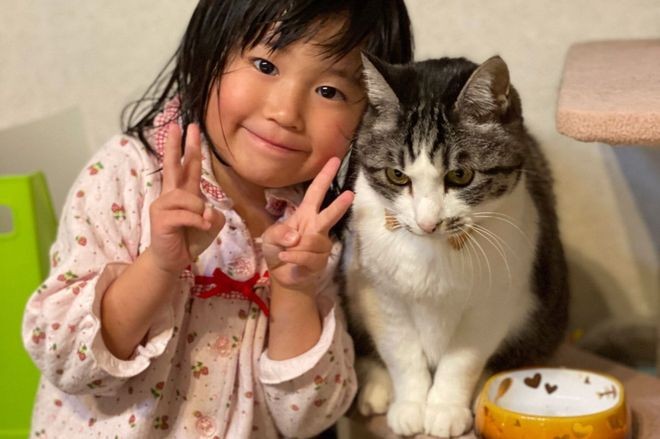 On a rainy, cold morning more than a decade ago, Kazuya Fukuda was having breakfast with his wife when they heard a meow outside.

When he looked outside a window in the dining room, he saw a soaking wet kitten on a planter. Fukuda noticed a crow on a nearby utility pole as if it were stalking its prey.

When he came home that night, he found that his wife had welcomed the kitten into their home.

Given the name “Potato,” the male feline was friendly and affectionate. When Fukuda was sitting in a chair, the cat would jump on his lap. And when he was sleeping, Potato would hop on him, wanting to sleep together.

AFTER DAUGHTER WAS BORN

In May 2015, five and a half years after the couple took in the kitten, they welcomed their first daughter.

Although Potato sometimes slept with the baby in the crib, the cat never hurt her.

When the baby learned how to crawl, Potato was often seen walking side by side with her.

Fukuda thought the cat was pretending to be her older brother.

While the family was having breakfast, Potato would always hop on the dining table to sit in front of the daughter. It became his daily routine to eat a small piece of bread from her.

Fukuda told his daughter that Potato was her older brother. But soon she became big enough to hold her “big brother” in her arms.

ONE YEAR TO LIVE

In September 2018, two years after Fukuda went independent to become a professional model maker at age 40, he took Potato to an animal hospital for a vaccination. The veterinarian told him that Potato’s heart was making a strange sound.

At a later date, another veterinarian specializing in the circulatory system said the cat had a congenital heart disease and had one year to live.

Fukuda told his daughter, then a kindergartner, that Potato was sick and he couldn’t live for much longer. But she was convinced that he could be cured by medicine. She made the habit of telling the feline to take his medicine and get better soon before she went to kindergarten every morning.

But Fukuda told his daughter, in a subtle way, that some diseases couldn’t be cured and that she should take a good care of him.

WHILE DAUGHTER WAS ASLEEP

Fukuda had a visitor at his home for a business meeting during the day. Although Potato had never seen the person before, he behaved friendly to the visitor just like he would always do.

But after he put his daughter to bed that night, Fukuda noticed that he couldn’t find Potato. He found the cat shaking violently under the bed.

He used an oxygen generator to save his life, but Potato started having a fit.

Fukuda prepared himself for the cat’s imminent death and continued petting him.

Potato breathed his last soon after.

He couldn’t stop crying, thinking that Potato might have endured the pain until his daughter fell asleep so that she wouldn’t worry about his condition.

When his daughter, now 5, saw Potato’s body the next morning, it seemed she was not able to realize he had died. The body was cold, and Potato wouldn’t move no matter how much she petted him.

She was gradually struck by how much she missed the cat and burst into tears, saying, "I will not go to kindergarten today."

When the family gave a last farewell to Potato at the crematory, she bawled, saying, “I beg you, please don’t burn Potato! No!”

In September 2020, about six months after Potato died, Fukuda took his daughter to a home improvement center.

As they headed to the parking lot after shopping, he noticed a pet shop in the annex building.

When Fukuda was thinking that he wouldn’t need to go in there for a while, his daughter begged for coins to try her luck at “gacha gacha” capsule toy machines lining at the entrance. She already has several key chains attached to her kindergarten bag.

Thinking it would only add to her collection, Fukuda was initially reluctant to give her coins. But he gave her the money because she had a solemn expression on her face.

Several days later in the morning, Fukuda found a small charm in the shape of a food can placed in front of a photo of Potato. It was a capsule toy.

“I thought Potato might be hungry because he hasn’t eaten anything,” she said. “He can eat it because it is a toy and he can play house with it.”

Fukuda realized why she begged for coins the other day.

“That’s true. I didn’t think about it. I’m sure Potato is pleased,” Fukuda said, struggling to hold back tears.

The capsule toy still remains in front of Potato’s photo. Sitting next to it is a cat figurine for which Fukuda played a part in development before it was commercially released.
It is modeled after Potato when he was alive and kicking.