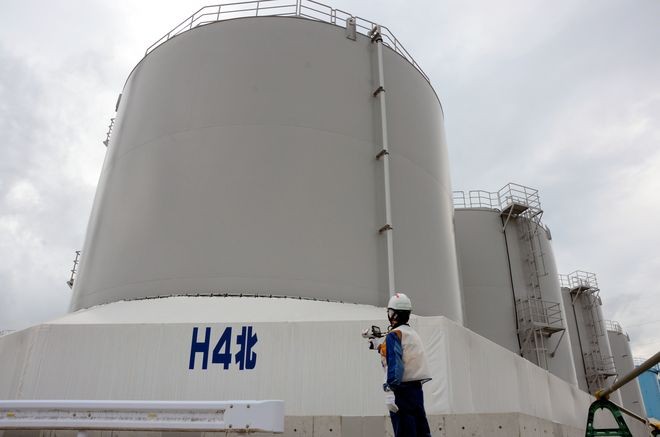 Storage tanks hold contaminated water treated with the ALPS multi-nuclide removal equipment at the Fukushima No. 1 nuclear power plant on Sept. 7, 2020. Each tank has a capacity of 1,200 tons of water, officials said. (Keitaro Fukuchi)

The plan to release treated radioactive water from the crippled Fukushima No. 1 nuclear plant into the sea will likely not resolve the chronic problem of contaminated water accumulating there, Asahi Shimbun calculations show.

The maximum rate of water discharge allowed under the government’s basic plan would be less than the inflow of rainwater and groundwater at the nuclear power plant, meaning that additional water storage tanks would inevitably be needed at the site.

The government on April 13 approved the basic plan to release more than 1 million tons of treated water into the sea. The government and plant operator Tokyo Electric Power Co. hope to start discharging the water two years from now. Existing storage tanks at the site are expected to reach full capacity around the same time.

The Asahi Shimbun studied this plan based on documents and materials published by the government and TEPCO.

The plan addressed the fact that the ALPS multi-nuclide treatment system cannot remove radioactive tritium from the water. Under the plan, the amount of tritium released with the water should not exceed 22 trillion becquerels a year.

That is the same upper limit for the amount of tritium-containing water that used to be discharged from the Fukushima No. 1 nuclear plant before the triple meltdown in March 2011.

TEPCO figures show the water held in the storage tanks at the plant had a mean tritium concentration of 730,000 becquerels per liter as of March last year. That translates into 22 trillion becquerels of tritium in about 30,000 tons of treated water.

At the same time, rainwater and groundwater entering the reactor buildings of the nuclear plant generated an average of 140 tons of contaminated water a day, or 51,000 tons throughout the year.

If conditions remain the same, the quantity of the water held in the storage tanks would grow about 20,000 tons a year, although this estimate could change according to the amount of precipitation.

The government and TEPCO have set a goal of reducing the generation of new radioactive water to an average of 100 tons daily, or around 36,000 tons a year, in 2025.

Even if that goal is achieved, the generation of radioactive water would exceed the release of treated water by several thousand tons a year.

Tritium concentrations vary broadly from one storage tank to another.

Selective release of low-tritium water could allow the discharge of more than 30,000 tons a year. That, however, would only come at the cost of having to release high-tritium water at a later date in smaller volumes.

“The results appear so sobering,” one government official said on learning of the trial calculation. “More storage tanks will have to be built.”

Toyoshi Fuketa, chairman of the Nuclear Regulation Authority, told a news conference on April 14 the planned cap of 22 trillion becquerels on the annual release of tritium “does not have a scientific meaning.”

He hinted at a possible review of the upper limit, saying, “There will be a change (in the rate of release) upon obtaining the agreement of concerned parties.”

TEPCO figures show the storage tanks at the plant have a combined capacity of 1.368 million tons. They held 1.25 million tons of contaminated water as of March 18.

The tanks are expected to be full between spring and summer 2023 if the stockpile of contaminated water continues to grow at its 2020 pace of 130 to 150 tons a day.

The nuclear plant has a number of candidate sites for new storage tanks. It would take one or two years to build them.

“We would fall behind time unless we estimate (the number of storage tanks needed) and start building them soon,” the government official said.