TEPCO vows to swiftly pay up on issue of dumping water 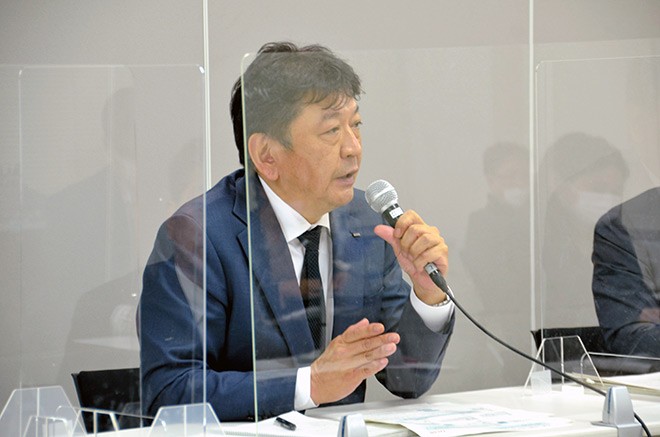 The utility that operates the stricken Fukushima No. 1 nuclear power plant pledged to swiftly pay compensation for any negative economic impact resulting from its decision to release treated radiation contaminated water into the ocean.

Tomoaki Kobayakawa, president of Tokyo Electric Power Co., told an April 16 news conference in Fukushima city that no restrictions will apply in terms of how long, which region or business sector is affected when considering the issue of compensation.

“We will respond in a flexible and appropriate manner to reduce the burden on victims as much as possible,” he said.

His comments followed an uproar by local fishermen to the central government's April 13 decision to go ahead and dump a huge volume of water from the grounds of the crippled nuclear complex after further treating it so radiation levels fall below regulation standards.

Kobayakawa also said TEPCO would apply for approval from the Nuclear Regulation Authority to set up the procedure to dump the water, although he did not offer a timetable for that.

It is generally understood that TEPCO will need about two years to be in a position to dump the water. The issue is critical because storage capacity at the plant for stored radioactive water is nearing its limit.

Kobayakawa also pledged to oversee comprehensive restructuring of TEPCO following a spate of incidents that include neglecting malfunctioning seismic meters at the Fukushima No. 1 plant and inadequate anti-terrorism measures at the company's Kashiwazaki-Kariwa nuclear plant in Niigata Prefecture.

However, Fukushima Governor Masao Uchibori, who met with Kobayakawa on April 16, clearly was not impressed.

He made his displeasure with TEPCO abundantly clear by citing the past failings as well as the recent decision to dump treated water into the Pacific Ocean.

“I hold major distrust as well as anger at the series of mishaps (at TEPCO),” Uchibori told Kobayakawa.

Uchibori accused TEPCO of not having an adequate sense of its responsibility for ensuring the range of steps needed to deal with decommissioning of the Fukushima plant and how it manages the contaminated water and eventually discharges treated water into the ocean.

TEPCO officials said all the stored contaminated water due for release will be further treated to reduce radiation levels for all elements except tritium to below legal standards.

The concentration of tritium, a radioactive form of hydrogen that cannot be removed by the water processing equipment, will be measured before the water is released into the ocean, they said.

TEPCO also pledged to strengthen its monitoring of the environmental impact on the ocean and conduct experiments raising fish in the treated water, a suggestion proposed by those in Fukushima.

Pointing to continued opposition voiced by Fukushima fishermen worried about the impact on their livelihoods, Uchibori said with some understatement on April 16, “I do not believe the situation is one in which the understanding of Fukushima residents and the general public has been obtained.”

A meeting of relevant Cabinet ministers handling the anticipated negative publicity resulting from the policy decision was also held on April 16 where agreement was reached to compile an action plan before the end of the year.

Hiroshi Kajiyama, the economy minister, said at a news conference the same day that a special team would be set up within the ministry to handle damage from negative publicity.

(This article was written by Junichiro Nagasaki and Yu Kotsubo.)