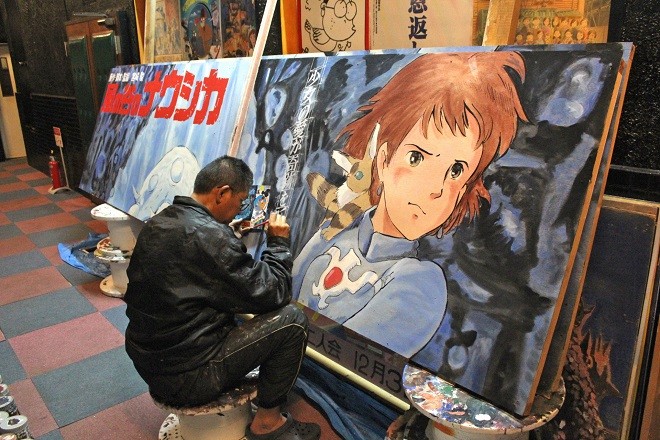 Masanobu Nakaya works on a movie billboard for “Nausicaa of the Valley of the Wind” in Odate, Akita Prefecture, on Oct. 14, 2020. (Provided by Onari-za)

Now, he's a part of the magical Ghibli world himself through a large movie billboard he drew by hand of Hayao Miyazaki’s anime film “Nausicaa of the Valley of the Wind.”

The billboard was officially approved by Studio Ghibli to be included in a Tokyo exhibition that is running through early May.

“I can’t believe that a work of a fan is on display,” Nakaya, 57, said with tears in his eyes at the venue on the opening day of April 15 at the Matsuya Ginza department store in Tokyo's Ginza district. “I’ll be happy if people remember it.”

Measuring 1.8 meters by 3.6 meters, the billboard details protagonist Nausicaa with a gallant look on her face, standing next to a gigantic Ohmu insect.

The work was displayed at Onari-za theater for about three weeks from Oct. 16 last year when the revival house screened the film.

Dedicated to anime magazine Animage and Studio Ghibli films, the exhibition will continue through May 5 at the Matsuya Ginza before it travels to Ishinomaki, Miyagi Prefecture, and other venues in and after June.

Nakaya came to Tokyo to attend a vocational school for design after graduating from high school.

At the time, he subscribed to Animage in which the original “Nausicaa” manga series was running. Nakaya said he was “moved to tears” as he watched the animated film adaptation on the day it was released, and saw the movie at least 10 times.

There was a row of movie billboards in front of Shinjuku Station back then. Impressed by their intensity and vibrant depictions, he aspired to draw one someday.

Nakaya worked at a design firm in Tokyo and other companies before returning to Akita Prefecture.

Onari-za had been closed due to financial difficulties, but the theater reopened in 2014. He felt compelled to volunteer to draw billboards after seeing theater staffers having difficulties in creating them. Since then, Nakaya has painted 166 movie billboards on a volunteer basis.

When the theater decided to hold a revival screening event in 2020, Nakaya used the original comic volumes, magazines, posters and other documents that he had stockpiled as reference materials. He went to the theater after work and on holidays to finish the billboard in under a week.

“I was feeling motivated and finished it in one go,” Nakaya said.

In addition to more than 10 characters, he included a rabbit kept by the theater into the illustration.

“Many customers were eagerly waiting not only for the screening but also the completion of the billboard,” said owner Yoshinori Kirikae, 47.

A tweet about the signboard posted by the theater caught the attention of Naoto Ishizu, 58, president of an event planning company in charge of the Ghibli exhibition. He was looking for materials suitable for the theme of Nausicaa, who has been beloved by fans for about 40 years.

He asked the theater for permission to borrow the billboard for the exhibition.

Ishizu said he and a Studio Ghibli member supporting the art event shared a feeling that it reflected the painter’s passion and affection for the movie.

Onari-za’s billboards for other movies also attracted the attention of theaters outside the prefecture, put on display in Tokyo and Kanagawa and Saitama prefectures.

“We are losing customers from distant places due to the coronavirus pandemic, but we’re happy if they enjoy the billboard at the Ghibli exhibition,” said Onari-za manager Kensuke Endo, 43.

Featuring more than 200 cels and other materials, the exhibition focuses on Toshio Suzuki, a former Animage editor who currently serves as producer at the Ghibli anime studio.