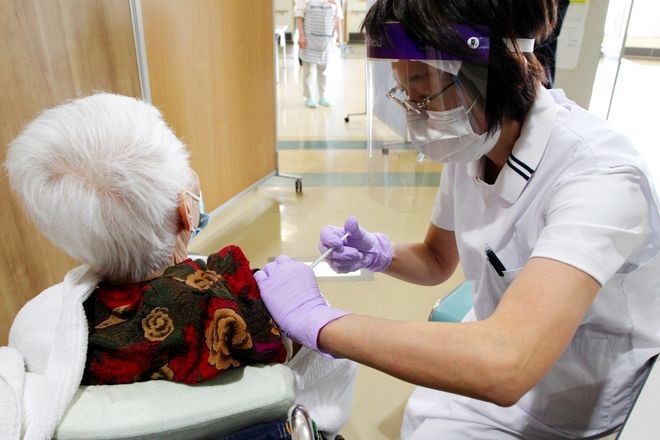 A resident of a nursing care home receives a COVID-19 vaccine in Ebetsu, Hokkaido, on April 12. (Provided by the Ebetsu city government)

A court ruling that went against the government started a “20-year gap” in vaccine development that has come back to haunt Japan.

Japan is lagging far behind the rest of the developed world in its drive to produce its own vaccines. The country is now dependent on overseas vaccines to inoculate the population, which puts it at the mercy of decisions abroad that could affect supply levels.

Many other countries are well into their vaccination programs. In Japan, inoculations for elderly citizens started on April 12.

Domestic drugmakers are working to develop vaccines, but none of them are expected to be put into practical use soon.

In June last year, AnGes Inc., a drug development venture based in Osaka Prefecture, became the first in Japan to start a clinical trial for a COVID-19 vaccine. The company is currently analyzing the results it obtained through a second phase of the trial, which involved 500 test subjects.

A final phase of the clinical test will be conducted on several tens of thousands of people, but it remains anybody’s guess when that phase will be completed.

There were initial hopes the AnGes vaccine could be used in spring this year, but the development work is well behind schedule.

“It has taken us so much time to accumulate data because we had no prior experience in developing a vaccine against an infectious disease,” said AnGes founder Ryuichi Morishita, who serves as endowed chair professor of medicine at Osaka University. “Other countries had developed basic technologies for making vaccines of a novel type by virtue of government assistance. That made a big difference.”

Elderly Japanese citizens are being inoculated with a messenger RNA (mRNA) vaccine product of Pfizer Inc. of the United States. Vaccines of the novel type, which use genetic information of the target virus, are quicker to develop than conventional vaccines.

Tokyo-based Daiichi Sankyo Co. opened a clinical trial for another mRNA vaccine in late March this year. A total of 152 male and female participants will receive two shots each by the end of this year, allowing relevant data to be worked out.

But no prospect is in sight for the required final, large-scale clinical test.

“We hope to establish an mRNA vaccine technology that can be used not only against the novel coronavirus but also against other infectious diseases that could break out in the future,” Daiichi Sankyo President Sunao Manabe told a Five-Year Business Plan briefing on April 5.

Other Japanese drugmakers are trying to develop their own COVID-19 vaccines, again with no prospects in sight for their practical use.

Tetsuo Nakayama, a project professor of vaccinology at Kitasato University, said Japan’s relative slowness in vaccine development stems from the “vaccine gap” and the country’s low sense of crisis over infectious diseases.

Around 1970, deaths following inoculations for smallpox and other diseases, as well as aftereffects caused by the shots, raised concerns among the Japanese public.

A number of lawsuits were filed against the government on the matter, and the Tokyo High Court ruled totally in favor of the plaintiffs in one case in 1992.

Over the 20 years that followed, the government remained negative about developing vaccines or introducing ones from abroad. As a result, fewer vaccines were available for use in Japan than elsewhere in the world.

Vaccine development emerged as a major requisite for coping with those diseases.

The mRNA vaccine was initially studied as a cancer remedy before it was repurposed against COVID-19.

In Western countries, research on vaccines partly doubles as a security measure against biological terrorism.

Developing vaccines is highly time-consuming because they must meet high safety requirements before they are administered to healthy individuals.

Japan has adopted the so-called convoy system. Under government intervention, small-scale drugmakers produce vaccines for regular inoculations, which allows them to count on stable demand.

But the vaccine market shrank in line with the depopulation of children, the main recipients of the shots. The government provided little assistance and businesses remained lowly motivated to develop new vaccines. As a result, little progress has been made in research and development.

During the novel coronavirus pandemic, the United States under the Donald Trump administration came up with “Operation Warp Speed” to set aside around $10 billion for the development of vaccine candidates.

The Japanese government has also helped businesses prepare for mass production of vaccines, even before the results of clinical trials were available.

But Japan’s initial budget for vaccine development assistance was worth 10 billion yen ($92 million), or one-100th of the allocation in the United States.

“That difference was the decisive factor for Japan’s delay in the development work,” Nakayama said.

It is generally believed that the Japanese public has low confidence in vaccines, partly out of concerns for their side-effects.

“The government had likely developed a mindset for perusing trends in public opinion before it ever made any decision on how to provide assistance for vaccine development,” said Takashi Nakano, a professor of pediatrics at Kawasaki Medical School.

Ensuring that vaccines are distributed to mid- and low-income nations presents another challenge.

Improving Japan’s vaccine development capacity would not only help the country to be “self-sufficient” in vaccines but also allow it to supply doses to poorer nations.

“It should not be forgotten that COVID-19 is a challenge not only for Japan but also for the entire world,” said Masahiko Hachiya, a physician with the National Center for Global Health and Medicine and one of the 12 members of the Independent Allocation of Vaccines Group of the World Health Organization.

The IAVG is an independent body that verifies fair distribution of COVID-19 vaccines.