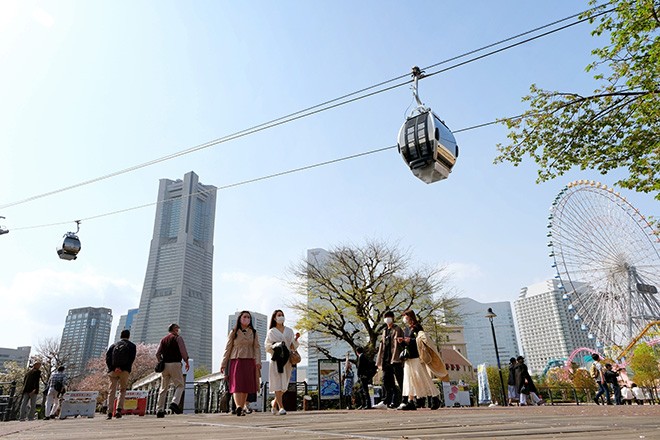 YOKOHAMA--City officials here are hoping that the Yokohama Air Cabin, Japan's first urban ropeway, will offer a huge lift to tourism in the port city when it starts operations on April 22.

It will carry passengers in the Minato Mirai 21 district over a distance of about 630 meters between two stations close to touristy areas.

At night, both stations and the gondolas will be lit up, setting a bright, festive mood in the city.

“We hope that it will have a ripple effect on the entire coastal area in the city center as a new symbol of Yokohama,” a senior city official said.

The ropeway will run between JR Sakuragicho Station Square near Yokohama Landmark Tower and Canal Park in the Shinko district where the Yokohama Red Brick Warehouse is located.

It is expected to become a new tourist draw in Yokohama although it will begin operations with restrictions on the number of passengers amid the COVID-19 pandemic.

The eight-seat gondolas can transport up to 2,400 passengers every hour with one-way journeys lasting about five minutes.

The number of passengers will be limited to half capacity for the time being as an anti-virus measure.

It marks the first time in Japan that a ropeway facility has been built permanently on level ground in an urban area, made possible by the relatively short route, which is mostly over water, according to a city official.

Some people, however, raised concerns over its effect on the cityscape, prompting Yokohama officials and the ropeway operator to have discussions.

They decided that the gondolas will be colored either silver or black and the stations will be painted gray or white to blend in with their surroundings.

(This article was written by Nanako Matsuzawa and Hiroyuki Takei.)