Municipalities struggling to chart a path to zero emissions 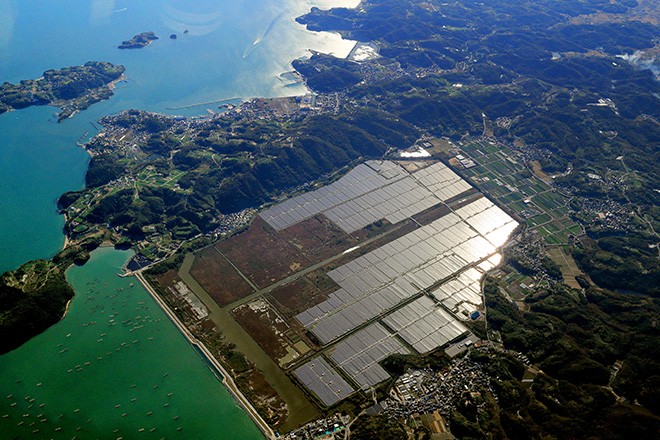 Only 30 percent of the municipalities vowing to become “zero emission” cities by 2050 have set concrete targets, according to a survey conducted by The Asahi Shimbun and Hitotsubashi University.

The number of local governments aspiring to become carbon neutral by that date has grown rapidly. In the past year and a half, the number of municipalities committing to that target date jumped from four to 370, which would represent a sizable chunk of the country’s population.

That trend comes on the heels of a campaign by Environment Minister Shinjiro Koizumi called “zero-carbon cities,” which urges local governments to commit to reducing carbon dioxide emissions to zero in real terms by 2050.

But most local governments surveyed said they face major hurdles when it comes to drafting a road map to meeting that goal. Those barriers include a lack of expertise and financial resources, not to mention a desire to steer clear of projects that could prove controversial with residents.

“Renewable energy has plenty of room for local governments to be involved, unlike large-scale and centralized thermal and nuclear-generated power,” said Hidetoshi Yamashita, an associate professor of resource economics at Hitotsubashi University, who led the survey.

“To achieve zero emissions, local governments need to advance projects to save energy and use more renewable energy by setting a clear goal. I think we have learned a lesson from the novel coronavirus pandemic that it is important to increase regional capabilities for providing energy and food.”

This is the third time municipalities have filled out the survey, after 2014 and 2017, while prefectural governments participated in 2017.

The survey was sent to the governments of 47 prefectures and 1,741 municipalities starting in November 2020. By the end of March this year, all the prefectural governments, as well as 1,288 municipalities, or 74 percent, responded.

Among the prefectural governments pledging they will meet the target, 95 percent said they have “set a goal” to introduce more sources of renewable energy.

Roughly half said they have “never discussed” plans of setting a goal for introducing new, renewable energy sources in their communities.

Many of the municipal governments that have not set a goal said they have not done so because they are “afraid of trouble between an (energy) operator and residents.”

Others cited a “lack of financial resources” and a “lack of the knowledge and experience necessary to operationalize such a project.”

Some said renewable energy would have a “negative impact on the landscape.”

That trend is consistent even among all municipal governments.

To both generate and consume electricity locally, it is important for local governments to invest in newly established energy companies that can supply power locally, rather than the companies selling their electricity to major utility companies. But few have done so.

The number of municipal governments that said their biggest reasons for introducing renewable energy would be to “locally produce and consume electricity” and “revitalize the community” has declined from the past two surveys.

Meanwhile, friction between residents and operators appears to be on the rise.

The number of local governments that said they have experienced or could experience conflicts between operators and residents increased 8 points from the previous survey to 46 percent of all the municipalities.

Cities said the main sources of these conflicts are noise, the landscape, landslides and light pollution.

While an increasing number of municipal governments are passing these kinds of ordinances, they are not being designed to encourage the introduction of renewables to the grid. They are being passed to require operators to hold public meetings where they report on and explain their plans and activities to residents to head off potential conflicts.

The Diet is currently considering revisions to the law concerning the promotion of measures that address global warming. The changes would require major urban areas with populations of 200,000 or more to set targets for introducing renewable energy sources.

The central government has set a goal to decarbonize the nation by 2050. Its green growth strategy stipulates that renewable energy will make up about 50 to 60 percent of the amount of power produced in the country.

Currently, that number is only about 20 percent.

Yamashita said there is a role for local governments to play here, but some hopes have been dashed.

“The central government established a feed-in tariff system in which it buys electricity for a set price to increase the amount of renewable energy sources,” Yamashita said. “But the system did not give much consideration to local economies. Expectations for local revitalization, as well as for local production for local consumption, have died down because of that.”

Some energy operators based outside of local jurisdictions have also advanced development plans that have angered locals, he added.

(This article was written by Mutsumi Mitobe and senior staff writer Toru Ishii.)

On April 12, eight media organizations from Covering Climate Now, a global collaboration of about 400 news outlets to strengthen coverage of climate change, issued a joint statement declaring a climate emergency.

The statement said that scientists globally have blown a whistle on a climate emergency. Unless humans take action immediately, much of the Earth will become inhabitable, the statement said. The media outlets are calling for an effort to spread the science-based information to tell the public how to protect themselves from the emergency, like the reporting on the novel coronavirus pandemic.

The Asahi Shimbun, which participates in Covering Climate Now, supports this statement.

The campaign was started in April 2019 by The Nation, a weekly magazine in the United States, and the Columbia Journalism Review out of a sense that media organizations must change as the world faces the crisis of global warming.