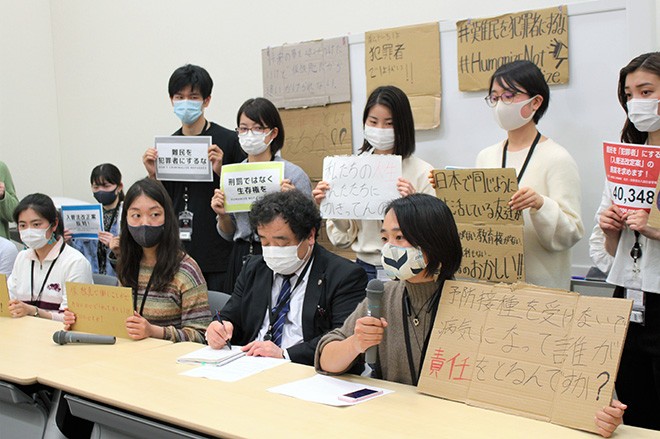 Students argue against the revision bill to toughen Japan’s asylum system at a gathering in Tokyo’s Chiyoda Ward on April 14. (Ryuichi Kitano)

Opposition lawmakers joined international criticism of a revision bill that would make it easier for the government to deport foreigners who are illegally staying in Japan, including those seeking asylum.

“It could endanger their lives if they were deported based on a mistaken judgment,” Tomohiro Yara, a member of the main opposition Constitutional Democratic Party of Japan, said at the Lower House plenary session on April 16.

Justice Minister Yoko Kamikawa, however, underlined the urgency and significance of amending the Immigration Control and Refugee Recognition Law.

The legislation is aimed at resolving the problem of prolonged detentions of foreigners after they are ordered deported by the Japanese government. Under the existing law, deportations cannot be carried out while they are applying for refugee status.

They can also apply for refugee status as many times as they want under the current law.

The bill would enable the government to deport foreigners if they seek asylum for a third time without any new justification for the application.

“Many individuals have been trying to avoid deportation, contributing to their drawn-out detention,” Kamikawa said. “It is a pressing issue to make the deportation process appropriate and effective.”

The bill also includes a clause that shortens the re-entry ban from the current five years to one year for those who promptly return to their home countries after the deportation order.

Opponents of the bill say the time limit does not matter for people who could face violence or suppression once they return home.

The United Nations High Commissioner for Refugees said in a statement: “While several parts of the bill are expected to strengthen the protection of asylum-seekers/refugees, there are, however, a number of aspects that raise very serious concerns.”

A special rapporteur with U.N. Human Rights Council has sent a letter calling for the Japanese government to review the bill, saying the revisions do not meet international criteria for protecting human rights.

“The bill gives consideration to the human rights of foreigners and does not breach any international law concerning human rights that our country has signed,” she said.

Kamikawa also said authorities’ decisions to deny asylum will unlikely be wrong because each case will have been scrutinized twice.

The most contentious part of the bill is that foreign individuals will, in principle, be limited to two asylum requests before they face possible deportation orders.

Yasufumi Fujino, a lawmaker with the Japanese Communist Party, pointed out that 19, or about 10 percent of all asylum applications granted between fiscal 2011 and fiscal 2018, came after their third try and disputes in court.

But the justice minister declined to validate the number.

“We cannot confirm it at our fingertips,” she said.

Another opposition party legislator asked Kamikawa how many people were actually granted refugee status on their third application or beyond.

“We do not have such data that we can verify,” she said.

Under the existing law, foreigners who have overstayed their visas will, in principle, be detained at a state facility while authorities evaluate whether they should be deported.

As of the end of last year, about 3,100 foreigners were living in detention facilities after refusing to leave Japan despite deportation orders. They applied for refugee status or turned to other measures to remain in the country.

Some of them have been detained for years as their asylum applications are processed.

The revision bill was compiled by the Immigration Services Agency of Japan and based on proposals put forth by an expert panel set up by the justice minister.

Japan has long been criticized for its significantly low rate among advanced nations of granting refugee status to foreigners.

(This article was compiled from reports by Akira Minami and Kazuya Ito.)