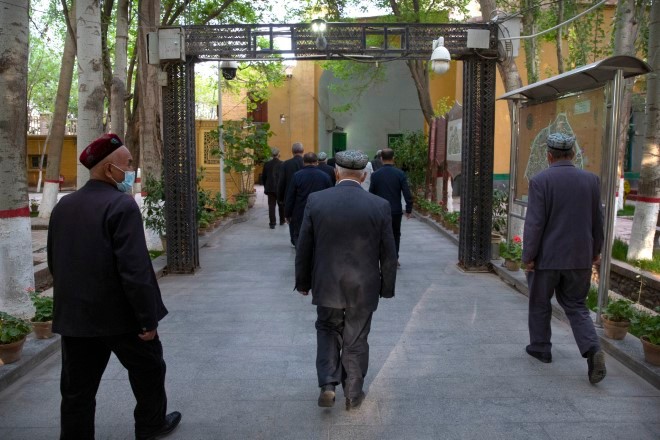 Uyghurs and other members of the faithful walk under an arch with security cameras as they leave after prayers at the Id Kah Mosque in Kashgar in western China’s Xinjiang Uyghur Autonomous Region, as seen during a government organized trip for foreign journalists on April 19. (AP Photo)

BEIJING/GENEVA--Human Rights Watch said on Monday that China’s actions in Xinjiang could meet criteria for crimes against humanity, calling for a U.N. investigation into “widespread” abuses and for businesses to shun goods made in the region.

The U.S.-based activist group said there was evidence of ongoing egregious abuses targeting Turkic Muslims, which include Uighurs, Kazakhs and Kyrgyz people. China has consistently denied all accusations of abuse in Xinjiang.

“Given the gravity of the abuses against Turkic Muslims, there is a pressing need for concerned governments to take strong, coordinated action to advance accountability,” Human Rights Watch said.

United Nations experts and rights groups say China has detained over a million Uighurs and other ethnic minorities in Xinjiang since 2017 as part of a broad crackdown in the region.

The report cited cases of torture, enforced disappearances, labor transfers, sexual violence and other abuses based on evidence including witness testimonies, government documents and media reports.

Kenneth Roth, executive director of Human Rights Watch, said that such crimes were among the gravest under international law.

“Concerned governments should be imposing targeted sanctions--visa bans, economic restrictions and the like. They should be pursuing criminal cases under the concept of universal jurisdiction,” he told a news conference.

Companies that cannot ensure that their supply chains for textiles or other goods were not made using forced labor in Xinjiang should stop doing business there, the report said.

Sophie Richardson, China director at Human Rights Watch, said: “We really think this is a very important moment for anyone doing business in the region to pause and think very carefully about whether their operations really are free of serious human rights violations.”

The report provides a legal framework for how Beijing’s actions in Xinjiang could meet the criteria for crimes against humanity as defined by the Rome Statute of the International Criminal Court (ICC).

In December, the ICC said it would not pursue an investigation into the mass detentions because the alleged crimes took place inside China, which is not party to the Hague-based court.

Several Western governments have levied sanctions over alleged rights abuses against China, which has said it will not allow an independent investigation into its programs in Xinjiang.

Chinese officials initially denied the mass detentions but have since said people were participating in voluntary vocational training and de-radicalization programs, and they have since “graduated.”

Beijing has called Uighur witnesses abroad “actors” and says efforts to investigate Chinese policy in Xinjiang are led by “anti-China forces,” primarily in the United States.