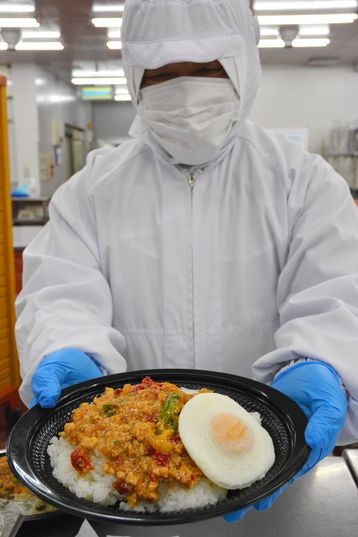 Gourmet dishes such as Thai-fried rice with basil, pork cutlets smothered with a demiglace in a rice bowl, and stewed beef and rice omelet were designed to be eaten while flying over international datelines.

However, they have recently become go-to options for many people stuck at home amid the COVID-19 pandemic, which has crushed many a fantasy vacation.

As the airline industry struggles through its worst crisis ever, carriers are not the only air travel-related companies that have seen business sputter.

With international flights at airports across Japan suspended or reduced for more than a year now, airline catering services have scrambled to cope with a plunge in demand and are turning to this new market on the ground to survive.

Gate Gourmet Japan Ltd., a Swiss-affiliated in-flight meal maker based in Narita, Chiba Prefecture, used to supply some 15,000 in-flight meals a day to 24 air carriers at Narita, Haneda and Hiroshima airports. Now, it only does 200 to 300 a day.

Gate Gourmet used a crowdfunding platform last year to collect donations to corporate working funds in exchange for halal frozen pizza bars and other products in a bid to prevent food waste from excess supply.

The company raised 10.39 million yen ($96,000) through two crowdfunding projects in October and December, soaring past its initial target.

“I was impressed by the company’s eagerness to eliminate food waste and maintain its operations with perseverance,” said a 59-year-old homemaker from Chigasaki, Kanagawa Prefecture, who donated to the campaign. “I was also interested in halal food. I think the company could further expand its sales channels if it also provided allergy-free food and other products.”

Gate Gourmet is also selling box lunches in neighborhoods around the three airports.

All international flight services have been suspended at Hiroshima Airport since March 24 last year, ending demand for the 350 or so meals a day the company’s Hiroshima branch used to supply to three air carriers there.

Since April last year, the local branch of the company has delivered meals three days a week to establishments located near the airport, including various businesses, a city hall, a hospital and a nursing home.

The lunches cost 600 yen, including tax. The weekly menus are designed by chefs and include standard dishes such as hamburger lunches, as well as more exotic foods and kids’ meal-style lunches.

The Hiroshima branch is planning to start offering Singapore chicken rice and other box-lunch products that will allow customers to feel like they are traveling aboard an international flight, company officials said.

The box lunches are delivered at temperatures of 10 degrees or cooler, which customers then heat up in their microwave ovens. The Hiroshima branch is now receiving orders for about 300 meals a week.

“I had seldom ever eaten in-flight meals, so I was curious to try some,” said Taeko Fukunaka, 46, an employee there. “The box lunches are both tasty and filling.”

The company is based in Tokoname, Aichi Prefecture, and it used to supply 6,000 or so in-flight meals a day, serving more than 20 air carriers at Chubu Airport. But with only 13 international flights a week there amid the pandemic, the company now makes fewer than 100 in-flight meals per day.

It began selling box lunches last spring at locations, including parking lots of its business partners in Tokoname, where the airport is located, and Nagoya Railroad Co.’s Jingu-mae Station in Nagoya.

“People have offered us words of encouragement, like, ‘I feel for you’ and ‘Keep it up,’” said Shoji Sakai, an official with Nagoya Air Catering. “I really feel thankful.”

All Nippon Airways Co. started online sales in December of in-flight meals manufactured by one of its group companies.

They are available in sets of 12 meals with a price tag of 9,000 yen, including delivery and tax. Available products include a set of “local specialty rice-bowl dishes” from various parts of Japan and a set called “sightseeing flight over Asia,” which includes a chicken cutlet in Osaka Daikoku curry sauce.

As of April 7, ANA has sold a total of 34,000 meal sets on 17 occasions. They became so popular that, in one instance, a product sold out just 5 minutes after it was put on sale.

In-flight meals are specially designed for high altitudes, where the lower air pressure slightly dulls one’s sense of taste. The Japanese dishes are prepared with stronger stocks, whereas the Western food often relies on more wine to bolster the flavor of the sauce.

The meals also tend to boast bright reds, yellows and other colors, so passengers can enjoy the visual aesthetics of their meals in their dimly lit cabins, officials said.

Mari Yamashita, 41, a resident of Kyoto, said she bought ANA’s in-flight lunch meals for her two sons, both in senior high school, to take to school and to their exams.

“My sons liked them because they turned out to be more filling than they appeared at first glance,” Yamashita said. “And they came in handy as ready-made lunches when I was busy.”

“We opened online sales after receiving requests from customers who said they wished to eat in-flight meals at home,” an ANA representative said. “We are hoping to expand our lineup, not only of the in-flight meals on offer but also of tableware and other products.”