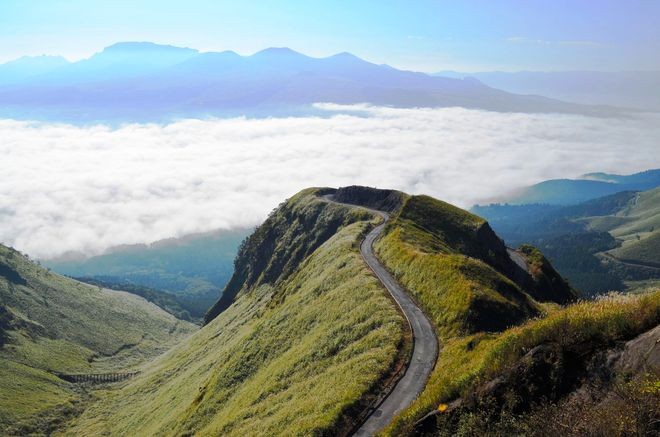 The Kario highway in Aso, Kumamoto Prefecture, overlooks a sea of clouds with the five peaks of Mount Aso in the background in October 2013. (Asahi Shimbun file photo)

ASO, Kumamoto Prefecture--Despite pleas from residents for restoration work, a municipal highway nicknamed the “Laputa Road” for its scenic beauty remains marred by quake damage from five years ago.

National and prefectural roads have been steadily restored since the Kumamoto Earthquakes rocked parts of Kyushu in April 2016.

But no repair work is in sight for the Kario highway, which is administered by the Aso city government in the eastern part of Kumamoto Prefecture.

The 5.7-kilometer road climbs the slope of the Aso caldera rim in the west of the city.

City government officials and local residents said a central government organ in the 1960s built the road for stockbreeding purposes.

Now run by the municipal government, the highway became known as a “road in the sky” because sharp bends along a ridge can jut out above a sea of clouds.

Tourists also coined it the “Laputa Road” after the floating castle in “Laputa: Castle in the Sky,” a 1986 animated movie by Hayao Miyazaki.

A large bus would occasionally stop nearby, and tourists would sometimes walk along the road, thereby hindering passage of farm vehicles.

The city government was planning to build a parking lot and a promenade there, the sources said.

According to the city government, a post-quake survey spotted damage at 31 locations along the road, and the cost of restoration was estimated at about 10 billion yen ($92 million).

Repairs would impose a heavy financial burden on local communities even if the project received central government subsidies in the name of post-disaster rebuilding work.

The city government has given up on restoration work by a standard approach.

The city assembly adopted a written opinion seeking assistance from the central government for work to repair the road at the request of citizens, who submitted a petition with more than 6,000 signatures in September.

Before the quakes, cattle breeders could reach their pasturelands in only 15 minutes, but they now have to make a detour, which takes them 50 minutes, said Toshimi Nakagawa, the 72-year-old union head of a ranch that spreads on top of the caldera rim.

“That makes me anxious when, for example, I am transporting newborn calves and their mothers,” said Nakagawa, who raises the Japanese Brown cattle breed, a local specialty.

Residents also used the highway to burn fields in areas around the caldera rim to maintain meadows there.

In the Aso area, National Route 57, partially disrupted by the quakes, was restored along two routes in October last year. A new Aso Ohashi bridge opened for traffic in March this year, replacing a collapsed one, along National Route 325.

“The national roads should naturally be the first restored, so I am happy about their restoration, but things will not be back to the pre-quake state unless the Kario highway has also been restored,” Nakagawa said.