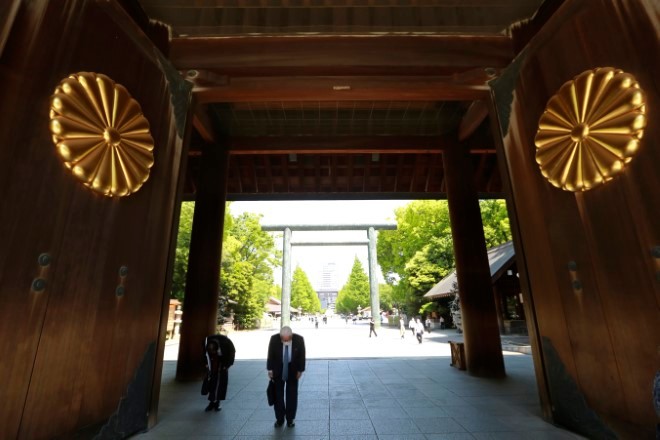 Worshippers bow at the chrysanthemum seal-bedecked gate of Yasukuni Shrine in Tokyo on April 21, the first day of the annual Spring Rites festival honoring the war dead. (AP Photo)

Prime Minister Yoshihide Suga on Wednesday donated a religious offering to a Tokyo shrine viewed by China and both Koreas as a symbol of wartime aggression, though he avoided a visit.

Suga’s offering of “masakaki” leaves at Yasukuni Shrine was his second since taking office in September.

Victims of Japanese military aggression through during the first half of the 20th century, especially the Koreas and China, see the shrine as a symbol of Japanese militarism because it honors convicted World War II criminals among about 2.5 million war dead.

Chief Cabinet Secretary Katsunobu Kato told reporters that Suga’s offering at the shrine was considered “an activity as a private person” and the government was not in a position to comment on it.

Suga’s predecessor, Shinzo Abe, visited the shrine Wednesday. “I paid respects for the venerable spirits of those who sacrificed their precious lives to fight for (our) country,” Abe told reporters afterward.

Abe stayed away from the shrine for seven years after his 2013 visit triggered outrage from China and the Koreas, but has regularly visited since he resigned as prime minister last year.

South Korea and China criticize the offerings or visits to the shrine, urging Japanese leaders to face up to and reflect on Japan’s wartime aggression.

In Beijing, Chinese Foreign Ministry spokesperson Wang Wenbin, at a daily briefing Wednesday, called the paying of respects to the shrine by Japanese officials “erroneous practices” and urged Japan to “deeply reflect on the history of aggression, draw a clear line with militarism, and take practical action to gain the trust of its Asian neighbors and the international community.”

South Korea’s Foreign Ministry expressed “deep disappointment and regrets.” The shrine “beautifies Japan’s colonial exploitation and war of aggression,” it said in a statement that urged Japanese leaders to reflect on Japan’s wartime actions as the basis of future-oriented ties between the two countries.