Taiwan now scoffs at Aso over ‘drinkable’ water from Fukushima 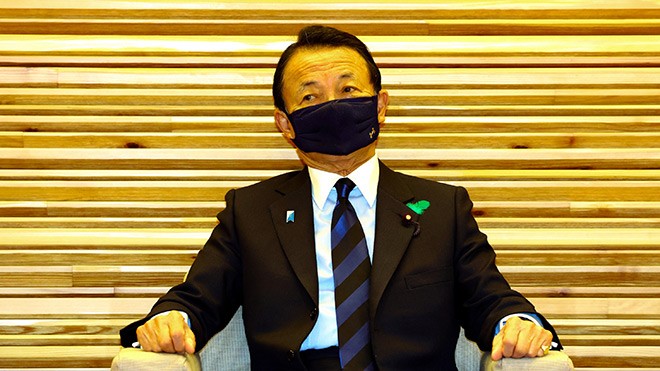 TAIPEI--Finance Minister Taro Aso’s comment about treated water from the crippled Fukushima nuclear plant prompted a reaction from Taiwan, which had been low key about Japan’s decision to dump that water into the ocean.

Aso came under fire abroad when he said last week it would be safe to drink the water that will be released into the ocean from the Fukushima No. 1 nuclear power plant.

The water will be treated first but will still contain tritium, a radioactive form of hydrogen. Aso, who is also the deputy prime minister, said the water will be so diluted of tritium that it would be drinkable.

On April 21, Hsieh Shou-shing, the chairman of Taiwan’s Atomic Energy Council (AEC), told reporters, “Of course, the water would not be suitable to drink.”

Previously, a spokesman for China’s Foreign Ministry issued a challenge to Aso.

“He should make such a comment after drinking the water,” the spokesman said. “The Pacific is not Japan’s sewage system.”

Aso originally said the tritium would be treated to levels that were about one-seventh of those set by the World Health Organization.

Hsieh made his comment before reporters outside the Legislative Yuan, Taiwan’s national assembly. Inside the assembly, he explained the possible effects on Taiwan from Japan’s discharge of more than 1 million tons of water from the Fukushima plant.

While Hsieh did not give a reason for his view that the water would not be fit to drink, he added that Taiwan would continue to closely observe developments in the two years or so before the water is actually dumped into the ocean.

The AEC issued a statement expressing regret on April 13 when the Japanese government decided to dump the water. It also called on Japan to conduct studies of radiation levels of seawater and marine life in waters near Taiwan and release the results.

The economy ministry, which oversees Japan’s nuclear power industry, has said that 31 nations and regions, including Taiwan, China and South Korea, also dump such treated water into the ocean. Ministry officials added that the water to be dumped by Japan would be diluted to levels far below regulatory standards based on common global safety levels.