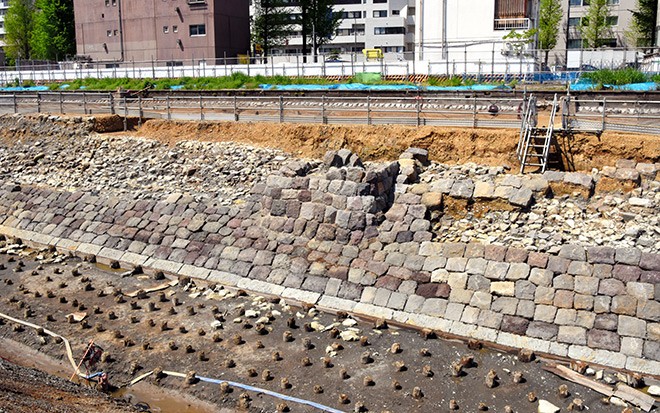 The Takanawa Embankment ruins near JR Takanawa Gateway Station in Tokyo’s Minato Ward. The central area is believed to be the remains of Japan’s first traffic light, according to the Minato Ward board of education. (Yuta Ichijo)

Despite an outcry by archaeologists, it will soon be the end of the line for part of the remains of an embankment built off Tokyo about 150 years ago for the nation's first railway service.

East Japan Railway Co. said it will preserve only a portion of the Takanawa Embankment ruins, which stand in the way of a major redevelopment project of the surrounding area.

The decision reached by JR East on April 21 followed a round of talks between the company and a panel of experts over the fate of the embankment in Minato Ward.

“We are aware of the ruins as a cultural property, but our redevelopment project is also a big one,” said Yoichi Kise, executive director of JR East in charge of redevelopment. “We made the decision after continuing discussions on ways to allow the ruins and the project to go hand in hand.”

The problem was that the “historic finds,” according to archaeologists, turned up in an area in which the company will redevelop at a cost of approximately 500 billion yen ($4.58 billion yen).

The project includes the construction of towering buildings housing offices and hotels.

JR East was reluctant to preserve all the remnants on site from the beginning. It said doing so would require a wholesale review of its redevelopment project, meaning a spending of an extra tens of billions of yen.

In the decision, the company said it will preserve parts of the relics that are assessed as having the most historic value, including an 80-meter-long bridge portion, and will open them later to the public.

But the remaining 700-meter-long segment that has been unearthed so far will be removed from the site after it is documented for posterity.

JR East also said a 30-meter-long section that includes the base of what is believed to be the country’s first traffic light will be moved to a new location in the redevelopment area for preservation. It added that there will be no change in the scheduled completion of the redevelopment project in fiscal 2024.

The 2.7-kilometer-long Takanawa Embankment was part of the route when Japan’s first railway service began in 1872 between Shinbashi in Tokyo and Yokohama. It was built in shallow waters between near what is now JR Tamachi Station and what is now JR Shinagawa Station to allow a train to run over the sea.

Archaeologists say it was one of the rare examples of a train running in the sea in the world. A train running on the railway on the embankment inspired many paintings at the time as a symbol of the nation's modernization.

The embankment was believed to have been removed when the area was reclaimed in or after the late Meiji Era (1868-1912). But part of the remnants was first discovered in 2019 during a project related to JR Shinagawa Station. The ruins of a total of 800 meters of the embankment have since been discovered.

Following the discovery, archaeologists insisted that JR East had the responsibility for preserving all of “the ruins of East Asia’s first railway” and should review the redevelopment project, which was scheduled to start this year.

The railway company set up a panel of archaeologists and other experts to consider options for preserving the relics.

Although the company agreed on the preservation of some, it decided to remove the others.

In the face of the company’s decision, the panel said it cannot support the removal of the remains from the site as it will damage their cultural value.

However, it noted that panel members had to go along with it due to little time left until the start of the redevelopment project.

Education minister Koichi Hagiuda, who initially called for the preservation of all the ruins after inspecting them in February, showed understanding to the company's decision.

“It will be ideal if the whole relic can be preserved, but JR East spent many years on devising the redevelopment project,” he said. “I give credit to their efforts to try to preserve them.”

(This article was written by Takashi Ogawa and Momoko Jingu.)