New humanoid robots closing in on humans with better dexterity

The robot developed by Man-Machine Synergy Effectors Inc., an entrepreneurial spinoff from Ritsumeikan University, works like a human employee. (Video by Jin Nishioka) 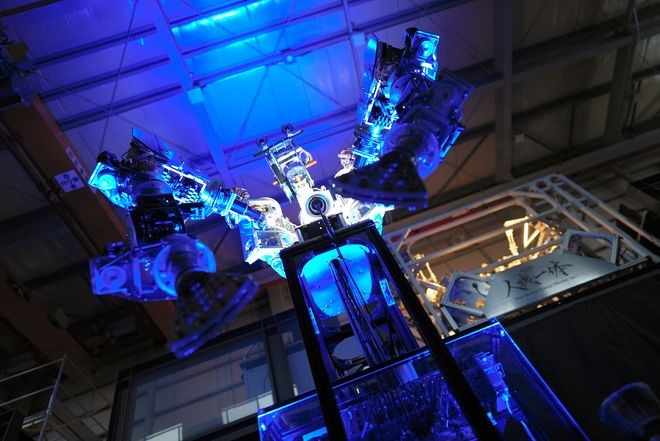 It's midnight, and the humanoid robot, its two eyes glittering in the dark, is working the graveyard shift at a railroad crossing.

The scene straight out of a sci-fi movie is right around the corner from becoming reality.

Start-up firms in the Kansai region in western Japan and the Tokyo metropolitan area have developed robots that follow actions performed by human operators in real time, bringing droids far closer to practical use.

As many hurdles stand in the way of mass-producing automatons and spreading their usage, the state has begun offering assistance to such companies.

On a recent day, a 2.5-meter-tall android was emitting mechanical noises as it looked around with two small cameras resembling eyes while holding a balloon. Using carefully adjusted strength, it did so without breaking it.

The robot was without any kind of skin, just housed in an aluminum alloy body, with no effort to hide the cables hanging out.

Developed by Man-Machine Synergy Effectors Inc., in Kusatsu, Shiga Prefecture, as an enterprise of Ritsumeikan University, the robot was being operated by a human "pilot" using control sticks, seated in a cockpit beside it.

The operator, using virtual reality goggles, can monitor the images on the android's cameras and feel the weight and repulsion of objects that the android holds in real time via the control levers.

Using that sensory data, the operator can instinctively comprehend how to manipulate the robot.

Robots for use at automobile welding facilities and food production lines are programed beforehand so that their parts can move at the right time in the correct position.

But the one created by Man-Machine can flexibly respond to various situations since a driver pilots it onsite, much like a power shovel. The human features of two eyes and arms also help improve its operability.

At the end of this fiscal year at the earliest, Man-Machine expects to start a verification test in which the robot will tighten screws with tools and spray paint as part of overhead wire maintenance on tracks.

After the experiment’s outcomes are examined, Man-Machine Synergy Effectors is looking to put the robot into practical operation by 2025, when the Osaka-Kansai Expo will take place, representatives of the company said.

The operator can direct the robot's movements using sensor-mounted gloves. When the operator's hands or fingers move, the 177-centimeter-tall robot duplicates the motions.

The robot's five fingered hands enable it to retrace detailed actions, such as picking something up and turning dials.

It is intended to work at risky sites including nuclear power plants and facilities handling dangerous chemicals.

The robot succeeded in pouring liquid in a beaker into a measuring cylinder and pushing a cart by hand for transportation during a joint trial run with oil vendor Eneos Corp.

FUTURE'S HERE, BUT WHO'S BUYING?

A futuristic society appears to be rapidly nearing reality where people live close to androids. But paths for commercialization have been cleared in only a few projects such as Man-Machine Synergy Effectors and Meltin MMI.

One challenge is the unpredictable market demand for the robots following their introduction.

No matter how unique certain technology is and how excellent its performance is in the research phase, it is difficult to estimate how many customers want to utilize it or how many businesses will really need it.

For that reason, robot manufacturers often hesitate to produce their machines in large quantities.

Another problem is that not all employers who have skilled staff work in hazardous environments feel the need to replace them with robots at a high cost.

“People feel the latest technologies are interesting but have no idea about how to take advantage of them,” said Hakase Kanaoka, 49, president of Man-Machine Synergy Effectors. “Researchers must link businesses that have facilities needing robots with the manufacturers of robotic products so that they will reach their goal together as a team.”

The government has started extending a helping hand to entities that have high quality technologies but are struggling to put their products on the market.

The economy ministry’s New Energy and Industrial Technology Development Organization (NEDO) regularly organizes events for involved corporations, investors and other parties to provide opportunities for colleges to find corporate partners that want to use their academic results to develop products.

Through such opportunities, one university was tapped by robotic parts maker to release a new item related to its new technology associated with a speed reducer to generate torque by shifting from large gears to smaller ones.

NEDO started an innovative robot research and development foundation building project in October last year so that businesses reluctant to pour funds into research programs that may not prove fruitful can find college labs that already have the required techniques.

Under the project, a total of 1.2 billion yen ($11.1 million) will be offered for industrial robot research over five years, targeting 11 universities and eight companies to increase Japan’s international competitiveness in the industrial robot field.

“The government needs to provide support in areas marked by significantly high risks for businesses,” said a representative of the project. “Linking unused technologies at colleges with the needs of companies, we will realize their introduction in society.”