Scientists created ‘smell of fear’ in a lab. Mice exposed to it lived longer 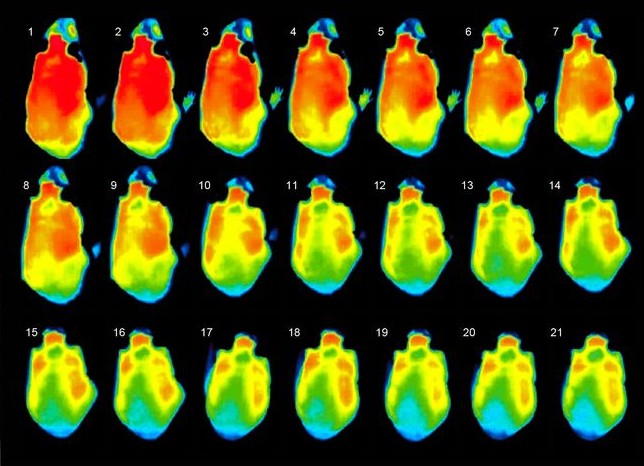 Thermography shows the body surface temperatures of mice exposed to the "smell of fear" are dropping gradually. The mice are in a state similar to hibernation and consume less energy than in an ordinary active condition, likely lessening the burden on their bodies. (Provided by Ko Kobayakawa, a specially appointed associate professor at Kansai Medical University)

Paralyzing fear might be the key to keeping patients alive, a study of mice suggests, according to a team of researchers at Kansai Medical University.

Mice exposed to the “smell of fear” were more likely to make it through a difficult-to-survive environment with little oxygen, the team discovered.

The finding could lead to the development of a new therapeutic agent to improve human patients’ survival rates, according to Ko Kobayakawa, a specially appointed associate professor of neuroscience at Kansai Medical University, and his colleagues.

Smells play a part in inspiring living creatures’ behavior, such as a tasty aroma stimulating appetite. But what kind of odor brings about certain stimuli and effects on animals is largely unknown.

The team in 2015 developed an artificial smell that makes mice experience the same level of fear they feel when they are caught by cats and other predators.

The pungent aroma smells like roasted beans, and mice sniffing it were confirmed to start fleeing or shrinking in horror.

In the team's latest study, mice which inhaled the scent or were injected with it were put in an environment with such low oxygen that it would normally cause them to die within 10 to 15 minutes.

All the mice survived for two or more hours, with one still alive even six hours later.

The scientists said the smell likely sent the mice into a condition resembling hibernation.

Bears and other animals spend the winter in a dormant state with their body temperatures lowered. During hibernation, they consume less energy than in their normal active condition and need less oxygen.

The temperatures of mice exposed to the scent the team created gradually fell to a level close to that of the room they were in and the mice appeared to go into a sleep resembling hibernation. Needing less oxygen in that state thus enabled them to survive for many hours even in a place with little oxygen.

But the mice’s state differed from ordinary hibernation in one respect.

A type of immune cell known as a monocyte rose tenfold in volume in mice treated with the smell. But animals that are hibernating have fewer immune cells.

That means the mice were far more resistant to pathogens.

“The stimulus of fright likely induced the potential ability to save life in a different way from winter sleep under natural conditions,” Kobayakawa said, commenting on the difference.

The human body has sensors to detect threats and organs to send that sensory data to the brain. If the smell of fear for mankind is identified, an aroma therapy might be developed to raise survival capabilities of patients treated in emergencies and undergoing surgery.