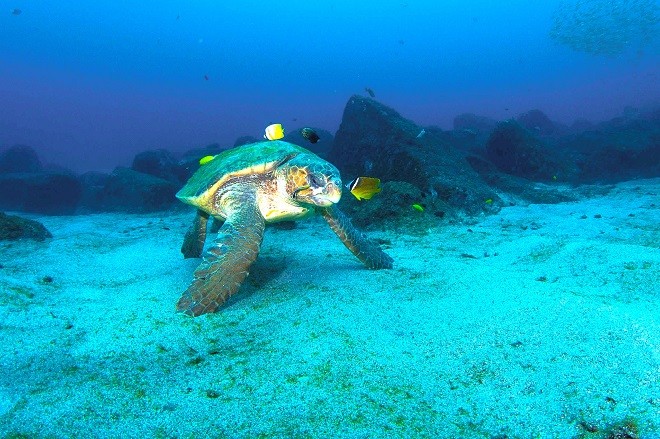 A loggerhead turtle rests on the seabed off Nagatahama beach in Yakushima, Kagoshima Prefecture, while small fish eat parasites on its shell. (Shot by Itaru Takaku)

YAKUSHIMA, Kagoshima Prefecture--Underwater photographer Itaru Takaku has been tracking the lives of loggerhead sea turtles living at Nagatahama beach over the last decade and is bringing them up close in a new photo book.

Nagatahama beach is one of the most significant egg-laying sites in the world for the endangered species.

The 38-year-old's latest book features photos of loggerheads that show how they lay eggs, hatch and then head out for the ocean.

However, Takaku has also witnessed detrimental environmental changes in the past 10 years that make him concerned about their future.

He wants readers to understand how the way humans live is closely connected to their natural surroundings.

The front cover of the new book, "Okaeri, Umigame" (Welcome back, sea turtle), features a baby loggerhead with its flippers extended.

The contents include about 40 photos taken between spring and summer every year.

One photo shows a mother loggerhead lying on the moonlit beach, while another shows many eggs, roughly the size of ping-pong balls, under its shell.

Newly hatched loggerheads are seen scurrying to the shore as they escape from being prey.

Other photos include two turtles mating in the water, and a mother turtle sleeping on the seafloor after laying eggs.

Takaku moved to Yakushima island in 2009, fascinated by its surrounding ocean where temperate and subtropical fish co-exist thanks to the Kuroshio Current. He has taken photos of more than 1,000 species of creatures.

But while he continues to photograph loggerheads, he has grown increasingly concerned about their prospects. The photographer has seen mother turtles struggle to find places to lay their eggs because the beaches have shrunk due to tide embankments and land reclamation projects.

On other occasions, Takaku has come across eggs scooped out of the sand after typhoons.

It is believed that it takes baby turtles about 20 years to grow up in the west coasts of Mexico and the United States and return to Yakushima.

"An environment for them to return home in peace is being lost because the beaches for laying eggs have shrunk and they are mistakenly caught in fishing nets," Takaku said.