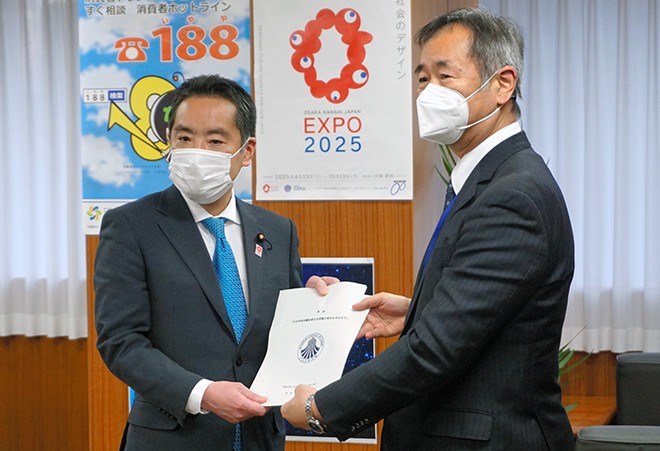 Takaaki Kajita, president of the Science Council of Japan, right, delivers a statement demanding membership to six scholars to Shinji Inoue, the state minister in charge of science and technology policy, on April 22 in Tokyo. (Rintaro Sakurai)

The government stood by Prime Minister Yoshihide Suga’s rejections of six scholars to the Science Council of Japan after the body on April 22 adopted a statement demanding he retract that decision.

The council submitted the statement, which calls for the immediate appointments of the six, to Shinji Inoue, the state minister in charge of science and technology policy.

But Chief Cabinet Secretary Katsunobu Kato said at a news conference the same day that Suga had made “the final decision” and the “entire process was over.”

The council’s statement said that Suga, as prime minister, has a responsibility to fill the council’s mandated 210 seats. It also said he is obligated to provide an “exceptional reason” for why he did not appoint the six.

Speculation is rife that the academics were denied membership because they had expressed criticism of government policies, including new national security legislation that expanded the overseas role of the Self-Defense Forces. Critics say such rejections threaten academic freedom.

Suga, however, has not given a clear explanation for why those six scholars were denied entry on the council.

The council has long urged Suga to retract his decision. But the statement represented a much stronger request and contained more direct language based on the council’s bylaw.

Takaaki Kajita, the council’s president, said the statement “expressed its stronger intention” and the contents “were also stronger.”

Inoue told reporters, “I will tell the prime minister as soon as possible.”

But Kato suggested there is no room for reconsideration. He declined to comment on why Suga denied the appointments.