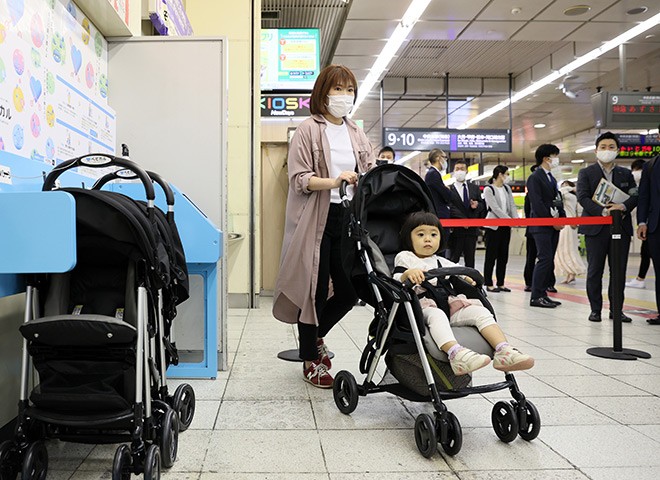 East Japan Railway Co. (JR East) on April 22 began renting out strollers at train stations in the greater Tokyo metropolitan area to cater to families who want to avoid having to lug their strollers aboard trains.

Unlike similar rental services offered only inside commercial facilities in train station buildings, the new service allows customers to use strollers both inside and outside stations.

“I avoid riding on a train when it's crowded because recent strollers are so huge that they might annoy other passengers in the same car,” said Ai Suzuki, 30, a mother, who was with her 2-year-old son in a stroller. “I think a service like this is convenient.”

JR East set up stands inside 16 train stations to store strollers for rent. Users can rent them at 250 yen ($2.32) for an hour and are charged 100 yen per 30 minutes if they continue to use the service.

The service is available between 9 a.m. and 8 p.m., in principle. Strollers can be rented out for a maximum of seven consecutive days.

Before renting strollers, users need to register on a dedicated website and make reservations by specifying when and where they want to use the service. They then receive QR codes that will be needed to unlock strollers at the stands.

The stands are unmanned, except for Tokyo, Kawasaki and Takasaki stations. The 16 stations each have at least three strollers, including spare ones, available for rent.

JR East said it will consider installing more stands at locations that have enough space depending on the usage of the new service. The railway operator aims to set up 40 stands by the end of March 2022.

Three strollers for children between 1 month and 4 years of age are offered for rent near ticket machines inside JR Shinjuku Station.

JR East hopes its new rental service will help families with young children get on and off trains more safely without pushing their strollers and save them the trouble of looking for elevators on platforms.

“We want to help families with children freely go out for a trip or quick shopping,” said Yasutaka Kikuchi, 42, an official of JR East’s Life-style Business Development Headquarters.

As measures against the novel coronavirus, disinfectant sprays are installed at the stands and staff will regularly clean the area, according to the railway operator.

“We want to meet demand of families who ride on trains with their children less frequently than commuters,” Kikuchi said.