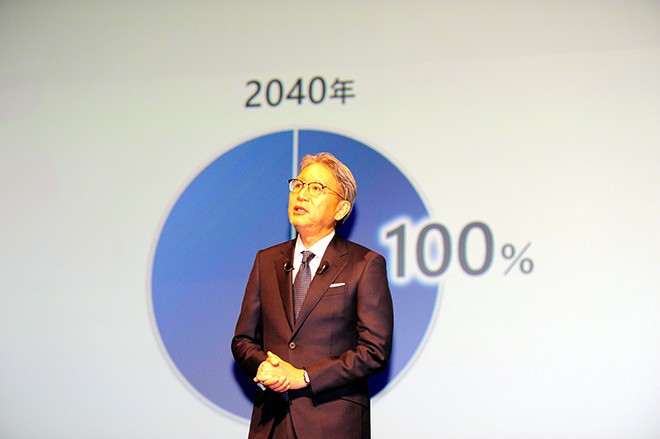 Honda Motor Co.’s announcement April 23 that it would no longer sell even hybrid vehicles by 2040 was a clear sign it is taking a totally different approach from longtime rival Toyota Motor Corp.

“It is the responsibility of an automaker to pursue a carbon-free future,” Toshihiro Mibe said at his first news conference as Honda president.

The announcement means Honda will no longer sell vehicles that run on gasoline and emit carbon dioxide by 2040, making it the first Japanese automaker to embark on this course.

Toyota has insisted that it will continue to sell hybrid vehicles that run on a combination of gasoline and electricity even though the global trend is toward electric motors.

Britain has announced it will ban the sales of gasoline vehicles from 2030. The U.S. state of California has moved to ban sales of vehicles that emit exhaust gas by 2035.

China is also offering subsidies to accelerate a turnover to electric vehicles.

Japanese automakers have trailed in the field because of their long-held global dominance with gasoline-powered vehicles.

Honda plans to invest 5 trillion yen ($46 billion) over the next six years for research and development on electric and fuel cell vehicles.

“We must bring down carbon dioxide emissions from our vehicles to zero by 2040,” Mibe said at the April 23 news conference.

But the road ahead for Honda will not be an easy one. With current technology, electric vehicles require a large number of lithium-ion batteries, but they are expensive, which makes development of next-generation batteries a priority issue.

Companies that supply Honda with the thousands of parts required to build a vehicle will also have to review their production plans.

(This article was compiled from reports by Junichi Kamiyama and Kazutaka Kamizawa.)