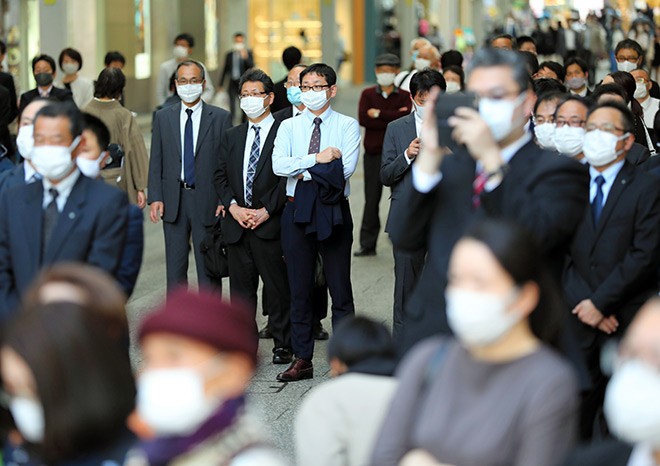 Voters listen to a speech by a candidate running for a seat in the Upper House re-election in Hiroshima’s Naka Ward on April 21. (Jun Ueda)

They were the first polls to be held at the national level since Suga replaced Shinzo Abe as prime minister last September.

As the LDP could not field a candidate in a third national-level election held the same day in Hokkaido, the opposition camp was able to seize all three seats.

The setback will likely force the Suga administration to rethink its strategy over when to call a Lower House election that must be held by fall.

The gains allow the opposition bloc to gather momentum in the months ahead and expand its strength, analysts said.

Haruko Miyaguchi, a former broadcaster backed by the main opposition Constitutional Democratic Party of Japan and other opposition parties, won in the Upper House re-election in Hiroshima Prefecture, defeating Hidenori Nishita, a former industry ministry bureaucrat who ran on an LDP ticket.

The re-election followed Anri Kawai’s loss of her seat after a court found the LDP lawmaker guilty of vote-buying in the 2019 Upper House election and her election was nullified.

Unlike the 2019 poll, LDP’s top brass such as Suga and Toshihiro Nikai, secretary-general of the LDP, did not go to Hiroshima Prefecture to show their backing to Nishita.

Instead, Fumio Kishida, former LDP policy chief and the head of the prefectural chapter of the LDP, spearheaded the campaign to defend the Hiroshima constituency, known as an LDP stronghold.

A third national election held the same day was the one in Hokkaido after former agriculture minister Takamori Yoshikawa resigned in December as a Lower House member of the LDP on bribery charges.

The LDP decided early on not to field a candidate in the election of the Hokkaido No. 2 Constituency.