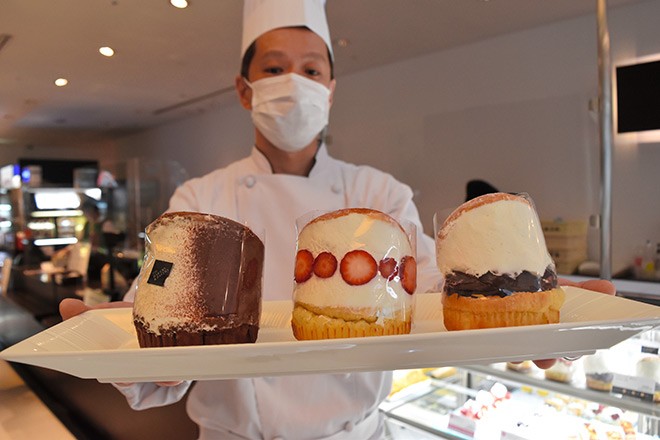 I was taking a walk on a recent weekend morning, and a cry of surprise escaped my lips when I dropped into a cake shop.

I found a round roll sliced in half and opened wide, which looks like a gaping mouth, and stuffed with fresh whipped cream. It was a maritozzo, a popular pastry in Rome.

While I was working as a correspondent in Rome, I would often eat one with a cup of cappuccino at a stand-up cafe.

The bun, easy to grab and eat, makes a perfect breakfast on a busy morning.

The maritozzo is said to be gaining popularity in Japan recently.

The pastry’s name is derived from the Italian word “marito” (husband). According to one theory, its origin lies in a type of bread for ancient Roman shepherds that their wives prepared to provide sustenance for their long day in the fields.

In modern times, some young men are said to have presented their sweethearts with a ring hidden in its cream to ask for their hand in marriage.

What is believed to be the oldest reference to the bun is a cheerful paean by a Roman poet in the early 19th century: “Every day I go out to buy the holy maritozzo.”

Soon after, the cholera pandemic that began in South Asia made landfall in Italy and went on a rampage.

Meetings were banned and restaurants and theaters were closed. People struggled to eat and work, unable to think about pastries.

Italy, the first nation in Europe to experience a major outbreak of the novel coronavirus, will start easing anti-virus restrictions in most parts of the country on April 26.

A little more than a month has passed since the government imposed a lockdown in response to a third wave of infections triggered by a variant.

Italy is gingerly reopening its economy due to the gradual progress made by its vaccination program.

In Japan, the third state of emergency came into effect for Tokyo and three prefectures on April 25.

Was Japan unable to learn lessons from the experiences of Europe, which started battling the pandemic earlier?

The sweet pastry will have a taste of melancholy if we eat one at home during the Golden Week holidays.