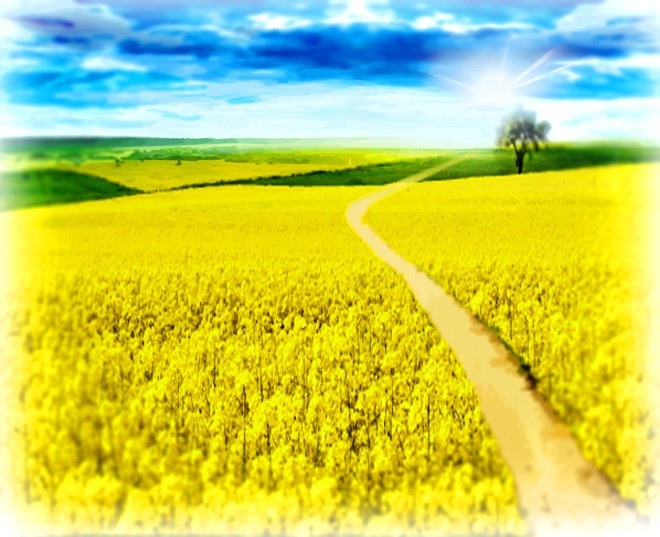 swaying on the sea
a hint of cinnamon
in stoneware blue
--Mary Vlooswyk (Calgary, Alberta)

ship in a bottle--
would you welcome me aboard
to sail to new seas
--Roberta Beach Jacobson (Indianola, Iowa)

The haikuist recalled a dream in which “we were pointing to the carp and calling each name loudly.” Black, red and blue fish-shaped windsocks fly out front of homes on May 5 to celebrate Children’s Day. The red “koinobori” represented her, the matriarch of the family. Grieving in Raleigh, North Carolina, Charlie Smith’s revelation deeply resonates as a photo-haiku.

Masumi Orihara’s neighbor in Atsugi, Kanagawa Prefecture, passed away, leaving behind a landscaping boulder that had been with her family for generations. Veronika Zora Novak dreamed of a ghost in Toronto, Ontario.

the blossom
that nobody sees…
ghost flower

stopped halfway
by the forsythia bush
a little yellow

Sally Fox was inspired by recollecting Sei Shonagon’s and Murasaki Shikibu’s poetry. She decided to capitalize and place a comma or period on each of her lines. Murasaki Sagano paused for a while on a bench in Tokyo.

An ellipsis at the end of a line can indicate contemplation or time passing, as indicated by this poem from Ivan Gacina in Zadar, Croatia. Dina Towbin experienced metaphorical ellipses in Washington, D.C. Satoru Kanematsu accepts the maxim that those who live today will soon join those who have fallen.

Blossoms open
The sky erupts with showers
Drumbeats on the roof

Once in bloom
these cherry blossoms
sure to fall

deep night
the first plum blossoms
disappear into the stars

Isabella Kramer composed this line on a long meandering walk in the countryside far away from Nienhagen, Germany: cancer screening the long sun ramble afterwards.

Finding inspiration in Hiroshima, Asako Utsunomiya revealed “today I found a light” walking toward the end of “the dark tunnel, full of energy toward the new life.”

Some snowflakes
but the bells jingle
and we’re dreaming

spring’s entry...
from a nearby tea grove
a lady’s song fills my cup

my lover’s touch
even the spring stars shiver

thin ice melts...
the warm touch
of the child’s hand

rising fever
my dog licks my hand
every minute

found only a book
of highlighted old haiku
nothing of me

Jacob Blumner’s friends enjoyed a few beers at an outdoor gathering in Canada.

When France decided to lockdown until May 2, Eleonore Nickolay created a “deja ku,” a haiku moment she’s experienced before, explaining “It’s a deja vu: our garden with the daffodils which our son offered us and planted in the garden last spring.”

second spring lockdown
gazing at the daffodils
from the first one

Chanting in Rawalpindi, Pakistan, Hifsa Ashraf reflected on the vibrating sounds coming from deep within.

After listening to a NASA rover audio recording of the Martian breeze, Kanematsu went outdoors to cheer the red planet. Then he came back inside to watch tennis star Naomi Osaka at the Grand Slam tournament in Melbourne. Zelyko Funda also composed a haiku for her during a break in the action when a butterfly rested on the titlist’s leg. John Daleiden shouted bravo from Phoenix.

drive-in opera
we watch “Madama Butterfly”
from our car

Lilia Racheva cheered the night alone in Rouse, Bulgaria. Mary Vlooswyk sailed at night with crew from Calgary, Alberta. Zdenka Mlinar swooned while sipping bubbly and decided not to pen a third line.

spring fireworks--
petals in the sky,
I drink champagne

fish smell
champagne in a boat

Haiku dreams at http://www.asahi.com/ajw/special/haiku/. The next issues of the Asahi Haikuist Network appear May 7 and 21. Readers are invited to send haiku with ellipses or em dashes, on a postcard to David McMurray at the International University of Kagoshima, Sakanoue 8-34-1, Kagoshima, 891-0197, Japan, or e-mail to <mcmurray@fka.att.ne.jp>.