State properties eyed as vaccine sites for 10,000 shots a day 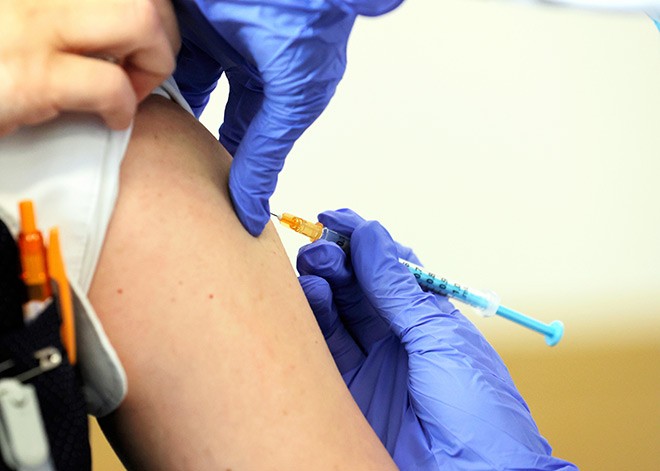 A COVID-19 vaccine shot is administered at the Tokyo Medical Center in the capital’s Meguro Ward on Feb. 17. (Pool)

The central government is considering using its properties as COVID-19 vaccination centers starting in May in hopes of providing shots to 10,000 people a day and speeding up the sluggish vaccine program.

According to officials, a joint government office complex located in the central Otemachi district in Tokyo’s Chiyoda Ward would be used to vaccinate residents and commuters in the capital.

A similar plan for Osaka is also being discussed, the officials said.

Local governments are facing shortages of health care workers who can administer the shots, so certified doctors and nurses of the Self-Defense Forces will take over the task at the state-run vaccination sites, according to the plan.

Prime Minister Yoshihide Suga said in the Lower House on April 12 that he would dispatch SDF members to resolve the shortage of medical staff on the local level.

The vaccination program targeting about 4.8 million health care workers began on Feb. 17, while people 65 and older started receiving the shots on April 12.

However, the Suga government has come under criticism for the slow pace of vaccinations, compared with those in other developed countries.

“The central government wants to complete the two-dose vaccinations of elderly people by the end of July,” Suga said at an April 23 news conference.

Health minister Norihisa Tamura was asked about that time frame during a TV program on April 25.

“It is a possibility that (people under 65) can receive the vaccine concurrently if there are vaccine supplies,” Tamura said.

Local governments have also expressed concerns about the availability of the vaccines for their populations.

The central government is expected to send 18 million doses of COVID-19 vaccines, enough to inoculate 9 million people, to local governments over the two weeks starting from May 10.

By the end of June, the central government is expected to have delivered a total of 105.8 million doses, enough for 50 million people. That includes two doses for each of the 36 million people who are 65 or older.