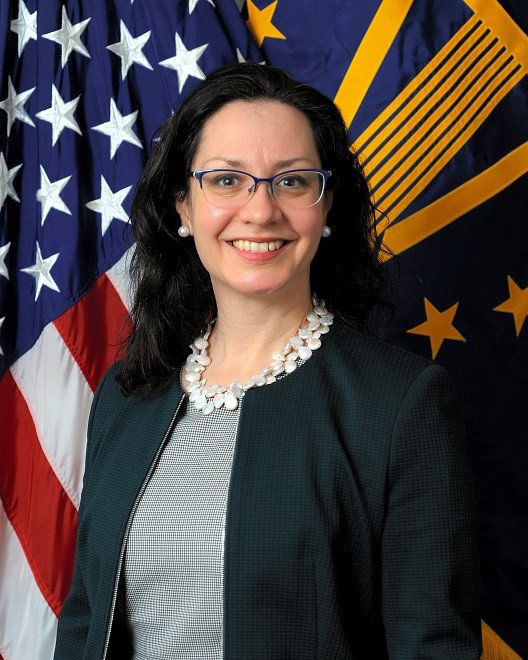 Leonor Tomero, the deputy assistant secretary of defense for Nuclear and Missile Defense Policy in the Office of the Secretary of Defense (From the U.S. Department of Defense website)

WASHINGTON--High-ranking U.S. officials said the administration of President Joe Biden will re-examine and possibly save on the costs of upgrading nuclear weaponry, a departure from his predecessor.

“Certainly that’s the objective of the president, is to find ways to reduce the role of nuclear weapons, and so we look forward to examining those issues, as part of our Nuclear Posture Review,” said Leonor Tomero, deputy assistant secretary of defense for Nuclear and Missile Defense Policy in the Office of the Secretary of Defense.

Tomero was explaining Biden’s intention to develop its NPR, or the government’s midterm atomic policy.

The Asahi Shimbun on April 7 conducted phone interviews with officials responsible for nuclear policy in the U.S. Department of Defense and the State Department.

The interviewees said the Biden administration will review the plan to replace outdated atomic weapons. The plan is estimated to cost a total of $1.2 trillion (131 trillion yen) over the next 30 years.

They stressed that the United States will discuss the issue with Japan and other allies that fall under the nuclear umbrella provided by Washington to retain deterrence.

The transport means and atomic warheads introduced during the Cold War are falling behind the changing times. For that reason, the administration of former President Barack Obama approved the modernization plan to replace them with the latest ones.

His successor, former President Donald Trump, then boosted the role of nuclear weaponry, by increasing the budget for the program and announcing the development of a smaller and easier-to-use warhead with a low yield as well as a nuclear-armed sea-launched cruise missile in the NPR.

Tomero cited the ballooning costs and suggested the Biden administration will re-examine the nuclear modernization plan in its NPR, noting that “several programs are very costly.”

She stated that Washington will “look at schedules and priorities” in determining the allocation of funds for defense.

Showing consideration for U.S. allies, Tomero said: “Providing credible extended deterrence, including with our nuclear forces, to Japan and our allies, will remain one of the highest priorities for us.

“We plan to fully consult with our allies, including Japan, as we begin these reviews,” she added.

As Biden has expressed that “the sole purpose of the U.S. nuclear arsenal should be deterrence,” a possibility is pointed out that his administration may vow to never launch a pre-emptive strikes using those kinds of arms unless it comes under an attack.

“I fully expect that the declaratory policy will be reviewed and looked at as part of our reviews,” Tomero said of the likelihood. “I think the sense is, ‘Is it time and are the conditions ripe for changing declaratory policy?’”

She reaffirmed likewise that “sitting down and conducting consultations with allies, including Japan as one of our closest allies, will be one of the first orders of business” over the topic.

Meanwhile, Alexandra Bell, the deputy assistant secretary of state in the Bureau of Arms Control, Verification and Compliance, reiterated the conventional U.S. stance over the Treaty on the Prohibition of Nuclear Weapons, which went into effect in January this year.

“It won’t have an impact on U.S. nuclear weapons policy or our extended deterrence relationships,” Bell said.

Bell argued, “The United States understands and shares the desire to advance disarmament goals, and we’re committed to those goals. We don’t believe the Treaty on the Prohibition of Nuclear Weapons is the right way to go about that, but we understand because we have these shared goals. We’d like to prioritize what we do agree on.”

She told The Asahi Shimbun that the United States will seek discussions with non-nuclear nations toward the review meeting for the Treaty on the Non-Proliferation of Nuclear Weapons scheduled for this summer.

(This article was written by Takashi Watanabe and Ryo Takano.)