In a crucial race, even an LDP chapter turns against Suga 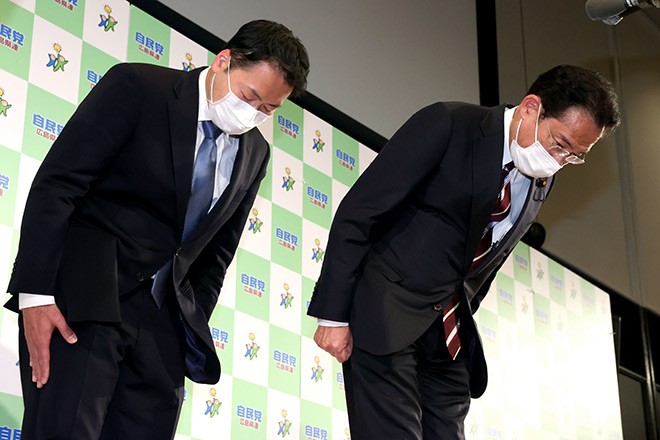 Prime Minister Yoshihide Suga received a message of disapproval not only from voters but also a prefectural chapter of his ruling party with his miserable failure in his first Diet election test.

They were the first elections for Diet seats held under Suga as the LDP president. They came at a time when the party has been rocked by various scandals and accusations of poor leadership in dealing with the COVID-19 pandemic.

The LDP did not field a candidate in the Hokkaido race. But that loss by default, coupled with the two other defeats, jolted party headquarters in Tokyo and will likely force Suga to tread lightly as party chief in the coming months.

“I will take the people’s judgment seriously and reform what should be reformed,” Suga said on April 26 about the results of the elections.

LDP leaders expected a defeat in the poll in Nagano Prefecture, a constituency where the party has traditionally fought against heavy odds. The Upper House by-election there was called after the death of a lawmaker of the main opposition Constitutional Democratic Party of Japan. The cause of death—COVID-19—further worsened the LDP’s chances in the poll.

But the race in Hiroshima Prefecture, long regarded as an LDP stronghold, was one the party could not afford to lose.

In the Lower House election in 2017, the LDP seized six of the seven single-seat districts in the prefecture.

Although the party’s reputation was severely tarnished by a vote-buying scandal in the prefecture, some LDP politicians were optimistic that the party would emerge victorious in the end.

But the headwind blowing against the LDP proved much stronger than what the party had expected.

Nishita, a former industry ministry bureaucrat, lost to Haruko Miyaguchi, a former TV broadcaster endorsed by the CDP and other opposition parties.

A key factor that made the LDP campaign in the Hiroshima race tougher than expected was the strained relationship between LDP headquarters in Tokyo and the party’s prefectural chapter.

With two Upper House seats up for grabs in that election, the LDP prefectural chapter wanted to play it safe by fielding just one candidate, an incumbent.

After LDP bigwigs rallied behind her in the campaign, Kawai won a seat. But the veteran LDP incumbent did not.

Later, suspicions arose that Kawai and her husband, a former justice minister, were involved in extensive vote-buying during the campaign. Kawai was found guilty, resulting in the nullification of her Upper House victory and the need for the re-election.

During campaigning for the re-election, the Hiroshima prefectural chapter made sure that Suga as well as LDP Secretary-General Toshihiro Nikai would not show up.

The two, along with then Prime Minister Shinzo Abe, had traveled to Hiroshima Prefecture to bolster Kawai’s chances in the 2019 poll.

In fact, Suga, then chief Cabinet secretary, was one of the LDP leaders who maneuvered to put Kawai in the race. Nikai was head of an LDP faction that Kawai joined after she won her first Diet seat.

LDP prefectural officials were also cautious about letting other party heavyweights from Tokyo give campaign speeches on Nishita’s behalf.

Even Nishita tried to appeal to voters by airing grievances about LDP headquarters during the campaign.

He referred to the party headquarters providing 150 million yen ($1.38 million) for Kawai’s campaign, 10 times the figure given to the incumbent in the 2019 vote.

“What was the purpose of the money?” Nishita said. “I am set to pursue this question.”

Komeito, a junior partner in the ruling coalition, was so alarmed by the disarray in the LDP that it employed the party’s signature tactic of door-to-door campaigning by its local politicians to help lift Nishita’s chances.

Komeito plans to field its first candidate in the Hiroshima No. 3 constituency in the next Lower House election, which must be held by autumn.

The smaller party did all it could because it feared an LDP defeat in the re-election could jeopardize cooperation between the two allies in the ensuing election.

But the effort did not turn the tide in favor of the LDP.