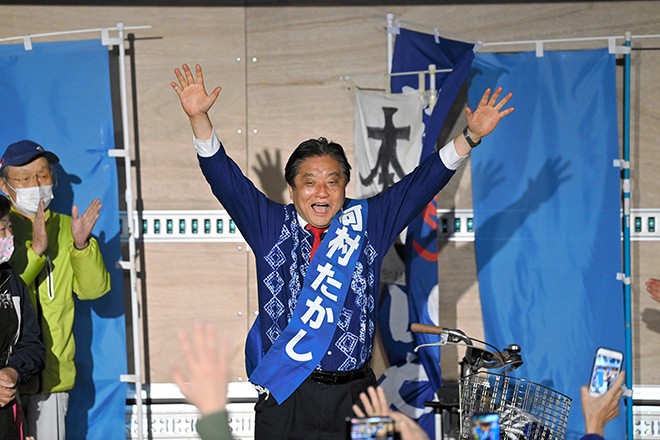 Takashi Kawamura wins the Nagoya mayoral election and raises his arms in triumph in Nagoya on April 25. (Yosuke Fukudome)

Kawamura, 72, the leader of his own regional political party, Genzei Nippon, overcame criticisms for backing the recall petition against Aichi Governor Hideaki Omura after it emerged that the petition was filled with fraudulent signatures.

He said this would be his last mayoral election, which means his final term will be defined over whether he can create strong policies to effectively handle the novel coronavirus crisis.

Turnout was 42.12 percent, compared to the 36.90 percent in the previous election.

Voters cast their ballots on several main issues, including Kawamura’s support of the discredited governor recall campaign and his economic measures amid the COVID-19 pandemic.

Kawamura, who has tremendous name recognition, found himself under siege from all parts of the political spectrum during the campaign.

He was effectively locked in a one-on-one battle with Toshiaki Yokoi, 59, a former Nagoya city assembly member.

“Political parties from the LDP to JCP are together trying to defeat me,” Kawamura said. “The election is a battle between citizens and the assembly member’s cooperative association, which opposes salary reduction.”

One of Kawamura's main policies has long been salary reductions for lawmakers and assembly members.

Just before the mayoral race started, Kawamura said that he would complete his fourth term and indicated he would not attempt to return to the Diet, and then devoted himself to his re-election bid.

He recognized that the public had cast a critical eye over his support for the recall petition. At one point, when Kawamura was giving a speech on the street, someone from the audience asked him, “What will happen to the recall petition?”

The election administration commission announced on Feb. 1 that 83 percent of 435,000 signatures are invalid, after it determined through a penmanship analysis that they were written by only a limited number of people.

On Feb. 16, two newspapers reported that a contractor with a Nagoya advertising company hired a large number of individuals through a job placement agency to copy the names and addresses of registered voters in Aichi Prefecture and forge their signatures on the petition to recall the governor.

Kawamura promised voters he would “thoroughly investigate” the forgery incident and said the buck stops at his door to reveal the truth, but he was constantly put on the defense over the matter.

Yokoi tried to leverage this to his advantage, describing the incident as the “biggest” issue of the election. He said it constituted a crisis of democracy.

“The suspicion toward him (Kawamura) is increasing,” he said.

Kawamura denied any involvement with the forgeries and reiterated that the office for the petition campaign group was responsible.

“I was not aware of the crime because it was done behind my back,” he said. “I am sorry for the people who have actively campaigned.”

When it came to his handling of countermeasures against the novel coronavirus, he underscored the success of Nagoya’s contact-tracing efforts, done by about 500 staff in local health centers.

“There is only a small number of infected patients in Nagoya,” he said.

But Yokoi criticized that there is a lack of health care coordination occurring between jurisdictions at a time of crisis.

“(Kawamura) is always confronted with the central, prefectural and neighboring municipal governments and is failing to coordinate hospital beds with them,” Yokoi said.

On the economic recovery front, when Yokoi promised to give gift certificates worth 20,000 yen ($186) to residents, Kawamura pledged a 30 percent shopping-point return on purchases made inside the city through cashless payment. The two debated how effective and fiscally responsible their stimulus proposals were.

While Yokoi received support from the major political parties, he lacked name recognition among voters and could not manage his own organization well.

Kawamura was able to win the day despite the unprecedented headwind against him, but he leaves the contest on shaky footing. He is unlikely to improve his relationship with the city assembly or Aichi’s governor, and he is expected to face an uphill battle in managing the city administration over the next four years.