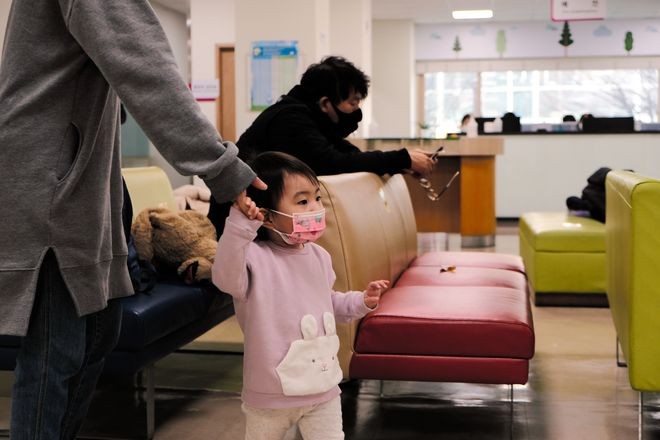 The waiting room at Sowha Hospital in Seoul, which was previously dedicated to pediatrics alone and therefore continues to receive many child patients, appears deserted on a weekday afternoon on March 2. (Takeshi Kamiya)

SEOUL--Sowha Children’s Hospital here, famed for being the first hospital in South Korea dedicated to pediatrics, withdrew the word “Children’s” from its signboards about two years ago.

“We did that to survive,” said Kim Kyu-earn, 69, director of what is now simply Sowha Hospital.

In South Korea, the total fertility rate, the number of children a woman is expected to have over her lifetime, set a new record low of 0.84 last year, staying below 1 for the third consecutive year.

That makes South Korea the only one of the 37 member countries of the Organization for Economic Cooperation and Development with a fertility rate below 1, which is also far below the corresponding figure of 1.36 for Japan in 2019.

By city and province, Seoul had the lowest fertility rate of only 0.64, which has hit Sowha Hospital hard in recent years.

During the period of economic growth from the 1970s through the 1990s, patients arrived from all corners of the country to visit the hospital in a prime location just outside Seoul Station.

The hospital occupied an entire six-story building of its own, and the reception area on the ground floor was packed with families with children waiting to see a doctor.

The ground floor now houses tenants, including a cafe, and the hospital itself is also a tenant, which occupies the second and third floors of the building.

The annual number of patients it received fell from about 320,000 in 1991 to only about 70,000 in 2018, so the hospital had to sell the building to escape its financial difficulties.

It eliminated the time-honored qualifier of “Children’s” from the hospital name in 2019 and set up a department of internal medicine to open its doors to adult patients as well.

One South Korean demographer said that, generally speaking, fertility rates seldom fall below 1 except in the midst of a war or a major disaster. Seoul, with a fertility rate of 0.64, is therefore in a virtual “wartime” state.

The situation is partially blamed on financial burdens.

Many South Korean parents desire to send their children to a university in Seoul. Children typically attend more than one cram school as early as when they are in elementary school, so the cram school fees weigh heavily on family budgets.

Entering a university is not the end of the race. Young ones continue to face a fierce competition for landing solid jobs, such as with major companies or as government employees.

Being located in Seoul is everything that counts when it comes to the choice of a university to attend or a company to work for. Nearly half of the national population lives in the capital and the greater Seoul area, where land prices continue to skyrocket. A typical apartment in Seoul is priced at 1.081 billion won (104 million yen, or $970,000) on average.

“Education is so expensive and housing is overpriced,” said Shin Haneul, a 33-year-old illustrator. “When having a baby is out of the question, it is quite natural to come to think that you don’t have to get married in the first place.”

Shin said a podcast titled “Behonse,” which roughly translates as “world of the unmarried,” is popular among young people like herself. The voice broadcast program features the lives of those who happily remain unmarried, with stories of their romances and life in the province.

“You feel less than confident when you think you are the only person to make up your mind not to get married,” Shin said. “Listening to ‘Behonse,’ however, allows you to convince yourself that you will be able to remain happy even if you don't marry.”

She said she felt infuriated every time she was told by people of the generation of her parents and grandparents that she should get married because she was of the marriageable age.

“I could end up getting married if I were to come across a good partner,” Shin said. “But I don’t want to have a baby, because the growth you achieve through your work counts for more and also because I wish to enjoy a comfortable life.”

MARRIAGES DOWN 10% UNDER PANDEMIC

Some point out the COVID-19 pandemic will further exacerbate the super-low fertility rates in South Korea.

The number of marriages serves as a predictor of the number of births in a subsequent period in South Korea, where few children are born out of wedlock. And there were about 10 percent fewer marriages in 2020 as compared to the previous year.

That is already beginning to tell on the number of births, which was down about 8 percent year on year during the first quarter of this year.

“The novel coronavirus pandemic virtually amounts to a ‘declaration of death,’ offsetting the effects of any measures being taken against the declining fertility rates,” said Park Yang-dong, president of the Korea Children’s Hospital Association. “Taking new measures is not likely to help turn around the number of births at a time when infections continue to spread.”

Park predicted the fertility rate will drop to 0.75 this year.

The government of South Korea has spent 224 trillion won since 2006 on measures against the falling fertility rates, but they have not been effective in turning around the trend because they have mostly centered on short-term policy measures, such as nursery fee support and birth subsidies for married couples.

A clue to the question of what policy measures would be effective may be found in Sejong, a city in central South Korea that is home to about 340,000 residents.

Sights encountered on the streets of Sejong are a world apart from what one would typically see in Seoul.

Many of the mothers seen outside a kindergarten, who were there to pick up their children, were seen pushing a stroller or holding their younger children in their arms. The scene indicated many parents in Sejong have two or more children.

In 2020, Sejong had a fertility rate of 1.28, double the corresponding figure in Seoul.

The city was created in 2012, with part of the country’s administrative functions relocated there. As the infrastructure of livelihood, such as kindergartens and cram schools, began to improve in Sejong, government workers began to get married and settle down in the city.

Woo Hye-jung, 43, a mother with three sons, said she came to live in Sejong four years ago. Her sons are in the third grade, in the first grade and 3 years old, respectively.

When Woo lived earlier in another city, she sent her sons to a private kindergarten for a monthly fee of about 800,000 won per head. The kindergarten here, by comparison, is publicly run and free of charge.

“Many mothers I know here say they wish they could have second and third children,” Woo said.

Chun Joon-ok, director of the kindergarten that Woo’s son attends, said, "The burden of education fees is smaller and the competitive society is less stressful here than in Seoul.”

“Sejong’s example shows that those who wish to have children and raise them can take a step forward if only there is a proper environment for doing so,” she said.

But the competition over exams is unlikely to go away, and the big picture that draws people to universities and workplaces in Seoul is unlikely to change any time soon.

“A fundamental measure to stem the falling fertility rates should be to reduce the extreme centralization of everything in Seoul so that finding a job in a provincial area after graduating from a university there will emerge as a viable life option,” said Cho Young-tae, a professor and head of the demography lab with Seoul National University.