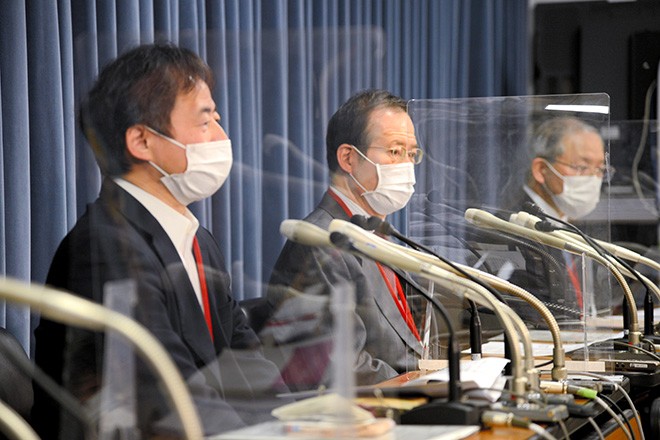 Masanori Okada, a professor at Waseda University, left, and Ryuichi Ozawa, a professor at Jikei University School of Medicine, center, explain their request for the government to disclose documents related to their membership rejection to the Science Council of Japan in Tokyo on April 26. (Yu Kamata)

Six scholars have threatened legal action against the government if it refuses their information-disclosure request to find out why Prime Minister Yoshihide Suga rejected their memberships on the Science Council of Japan.

Most of their requests for documents on the reason and history behind their rejections were made on April 26.

They said they will consider filing a complaint or lawsuit if the government fails to provide the documents or blacks out information in them.

“Democracy and the rule of law in Japan are being tested,” Okada said at a news conference in Tokyo on April 26. “If the government doesn’t fulfill its responsibility to explain the issue to the people, we must take a step to move it forward.”

At the same news conference, Ozawa said: “We requested the documents ourselves, so issues concerning personnel affairs and privacy are all cleared. We would like to correct the relationship among civic society, the government and academia.”

Suga has so far remained vague about why the six scholars were denied membership, often saying he cannot comment on personnel matters.

However, critics noted that some of the scholars have criticized government policies, including national security legislation that expanded the overseas role of the Self-Defense Forces. If the scholars were rejected because of their views, it would be a clear infringement upon academic freedom, the critics say.

Specifically, the rejected scholars are seeking documents managed by the Cabinet Secretariat and the Cabinet Office, based on the Law for the Protection of Personal Data Held by Administrative Organs.

A group of lawyers and law scholars on April 26 also asked the government to disclose administrative documents on the membership rejections.

They are seeking documents on recorded communications between Deputy Chief Cabinet Secretary Kazuhiro Sugita and secretariats, as well as papers submitted by the science council when it recommended candidates for membership.