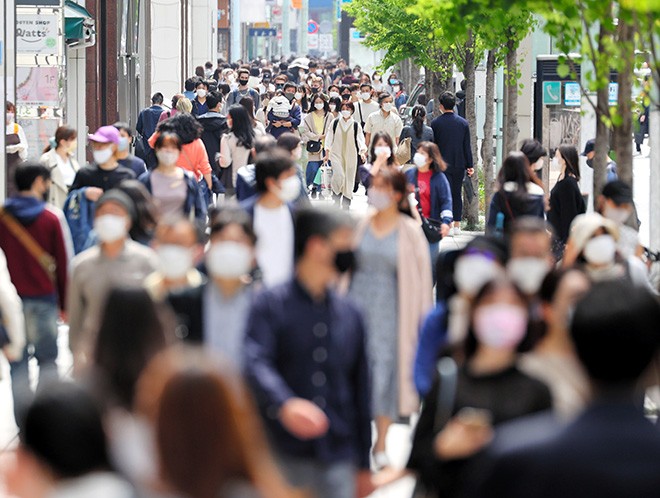 A street in Tokyo’s Ginza district is crowded on April 25, the first day of the third state of emergency period over the novel coronavirus. (Naoko Kawamura)

Japan surpassed the grim milestone of 10,000 deaths from COVID-19 on April 26, with 65 percent of the fatalities occurring this year, data showed.

Although the nation’s death rate during the pandemic is low compared with those in hard-hit Western countries, Japan is way behind other countries in East Asia and the Pacific region in containing the virus, according to the World Health Organization.

Japan’s accumulative death toll reached 10,025 on April 26, including deaths of patients who were aboard a cruise ship that docked off Yokohama early last year when the virus started to spread in the country, according to data compiled by The Asahi Shimbun.

Of the 10,025, about 6,500 have died since January, when the country was in the grip of the third wave of infections.

Japan is now struggling to stem the fourth wave of new cases, particularly in densely populated areas, such as Tokyo and Osaka, Hyogo and Kyoto prefectures, which have been placed under a 17-day state of emergency since April 25.

Other prefectures are also reporting surges in new infections.

The latest wave has been driven by variant COVID-19 strains, particularly one first reported in Britain, which are more contagious and potentially more deadly.

The capital accounted for the largest number of fatalities, at 1,876, followed by 1,376 in Osaka Prefecture, 843 in Hokkaido, 812 in Kanagawa Prefecture and 739 in Saitama Prefecture.

Under the central government’s first state of emergency in April and May last year, the daily death toll ranged from 10 to 20.

But fatalities began climbing in the summer with the second wave in new infections.

The daily death toll hit a record 121 on Feb. 20, when the capital and several other prefectures with large cities were covered by the second state of emergency.

Although fatalities declined for a while after the state of emergency was lifted, the death toll rebounded and topped 50 for three straight days from April 23.

Data compiled by the WHO as of April 26 showed that Japan’s fatalities per 100,000 people was 7.9, ranking 137th among 236 countries and territories whose figures were made available.

Japan’s ranking is not bad, given that 42 countries and territories, including the United States and many European nations, reported more than 100 fatalities per 100,000 people, health experts said.

“As Japan’s share of senior citizens is the largest in the world, its ratio of fatalities is relatively low, compared with many Western countries that have similarly large populations of elderly people,” Mitsuyoshi Urashima, a professor of preventive medicine at Jikei University School of Medicine, said.

But Japan’s record is eclipsed by countries in East Asia and the Pacific region.

These countries are known to have aggressively carried out mass diagnostic tests to quickly identify infected individuals within their borders and at entry points and separate them from the healthy population.

“Japan should learn from those countries to contain the disease,” Urashima said.

(This article was written by Takashi Endo and Akiyoshi Abe.)