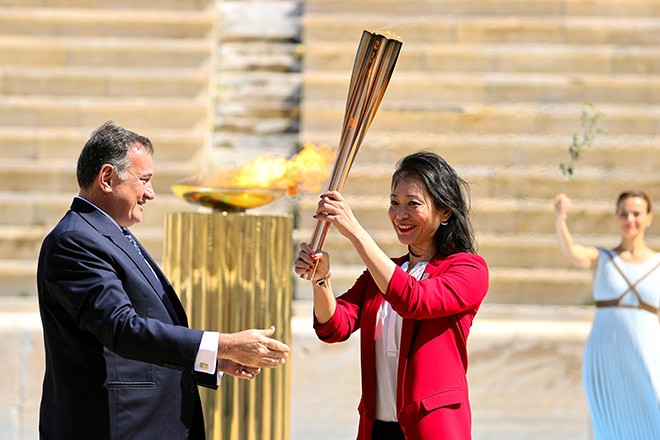 “I think there are things that I can do to be of service,” said Imoto, 44.

Imoto, who competed for Japan in the 1996 Atlanta Olympics, stayed away from sports after retiring from competitive swimming.

But the sexist remarks made by Yoshiro Mori, the organizing committee’s former president, earlier this year prompted her to become active again.

Imoto said she was shocked by the comments, which created an international uproar and forced Mori to step down.

“Little has changed since my competition days. Things are too backward,” she thought.

Soon she became interested in gender-related issues in sports in Japan.

Since February, she has served an adviser to a team to promote gender equality established by the Tokyo Organizing Committee of the Olympic and Paralympic Games.

Mikako Kotani, sports director of the committee who leads the team, asked Imoto, who currently serves as an education specialist at UNICEF, to take the post.

She accepted, believing that her experience working at the international organization that values gender equality and personal connections will help her to “become a bridge” and drive the issue forward in the Japanese sports industry.

Imoto said gender perspectives are at the center of discussions in each category, such as health, water, child protection and education, at UNICEF.

“I hope the sports industry in Japan will be that way, too.”

Imoto has also launched a project to educate athletes about gender-related issues.