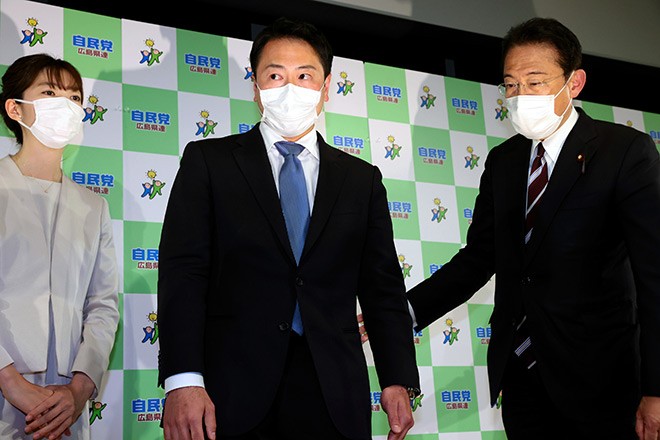 Former Foreign Minister Fumio Kishida and his aspirations to take over the top post in the ruling Liberal Democratic Party have taken the biggest hit from the party’s losses in three recent Diet elections.

Kishida took a huge gamble by becoming head of the LDP’s Hiroshima prefectural chapter in March to spearhead the campaign for party candidate Hidenori Nishita.

Scandals had tarred the image of the LDP before the Upper House re-election in the prefecture. But if Kishida could lead Nishita to victory, it would provide momentum toward the LDP presidential race in September, in which Kishida is again expected to challenge Prime Minister Yoshihide Suga.

But Nishita lost in the re-election to Haruko Miyaguchi, who was endorsed by the opposition bloc.

Now, some senior LDP officials are pinning the blame on Kishida.

“The damage was done to Kishida, not the Suga administration,” one of the officials said.

Of the three elections on April 25, the most crucial for the party was the re-election in Hiroshima Prefecture.

The LDP, however, felt it had a chance to salvage a win in Hiroshima Prefecture, which has long been a party stronghold.

Still, even members of Kishida’s own LDP faction said it would be too risky for him to lead the prefectural chapter because he would inevitably be held accountable for a loss.

But Kishida, 63, decided to push Nishita’s campaign, even with limited resources and help.

The re-election was called after Anri Kawai, who won an Upper House seat in the 2019 election, was found guilty of vote-buying earlier this year and her victory was nullified.

News reports about the scandal went on for months.

Many LDP politicians there had to keep a low profile because they had accepted cash from the Kawai side. The prefectural chapter, still seething that LDP headquarters had forced Kawai’s candidacy in the 2019 election, also did not want certain party leaders, such as Suga, to campaign on Nishita’s behalf.

Kishida apparently calculated that if he could help the LDP candidate pull through, he would remain a viable candidate in the party’s next presidential race.

Kishida’s chances were not as great as before, when Suga’s predecessor, Shinzo Abe, floated the idea of backing Kishida as a successor, but they were not entirely eliminated, even with his lopsided loss to Suga in the LDP’s election last year.

“My political fortunes are on the line,” he told aides about the gravity of the Hiroshima re-election.

He went to great lengths day after day to woo voters and call on LDP supporters to assist in Nishita’s campaign.

“I have never seen him doing this much for any other candidate,” an aide to Kishida said.

But it wasn’t enough.

“I am sorry that we could not win,” Kishida said calmly when asked by reporters about the election result on the night of April 25. “I will watch with attention how others will assess this defeat.”